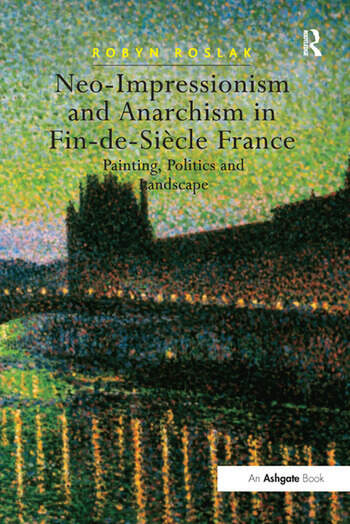 Neo-Impressionism and Anarchism in Fin-de-Siècle France: Painting, Politics and Landscape

In Neo-Impressionism and Anarchism in Fin-de-Siècle France, Robyn Roslak examines for the first time the close relationship between neo-impressionist landscapes and cityscapes and the anarchist sympathies of the movement's artists. She focuses in particular on paintings produced between 1886 and 1905 by Paul Signac and Maximilien Luce, the neo-impressionists whose fidelity to anarchism, to the art of landscape and to a belief in the social potential of art was strongest. Although the neo-impressionists are best known for their rational and scientific technique, they also heeded the era's call for art surpassing the mundane realities of everyday life. By tempering their modern subjects with a decorative style, they hoped to lead their viewers toward moral and social improvement. Roslak's ground-breaking analysis shows how the anarchist theories of Elisée Reclus, Pierre Kropotkin and Jean Grave both inspired and coincided with these ideals. Anarchism attracted the neo-impressionists because its standards for social justice were grounded, like neo-impressionism itself, in scientific exactitude and aesthetic idealism. Anarchists claimed humanity would reach its highest level of social and moral development only in the presence of a decorative variety of nature, and called upon progressive thinkers to help create and maintain such environments. The neo-impressionists, who primarily painted decorative landscapes, therefore discovered in anarchism a political theory consistent with their belief that decorative harmony should be the basis for socially responsible art.

Contents: Introduction; Neo-impressionism, anarchism and the 'republic of science and reason'; Anarchists, artists and artisans; Representing Paris: streets, bridges and petits boulevards; Anarchist geography and the idea of landscape; 'Dirty and radiant, depressing and cheerful:' the neo-impressionist suburbs; Anarchists and tourists in Provence; Conclusion: looking forward, looking back: neo-impressionism around 1900; Bibliography; Index.

Robyn Roslak is Associate Professor of Art History at the University of Minnesota, Duluth, USA.

'... a brilliant and compelling contribution to art history and anarchist studies. Traversing the fields of art history, political science, history, ecology, and geography, Roslak has effectively rewritten the history of one of the 19th-century’s most important art movements.' Allan Antliff, University of Victoria, Canada

’Robyn Roslak’s book is a welcome and illuminating study, adding to the still somewhat thin literature on neo-Impressionism.’ Art History

'... [a] ground-breaking study. ... Roslak’s book constitutes the first synthetic study of Neo-Impressionism to consider the anarchist import of this movement, free of the distorting lens of traditional Marxism.' H-France

Neo-Impressionism and Anarchism in Fin-de-Siècle France: Painting, Politics and Landscape