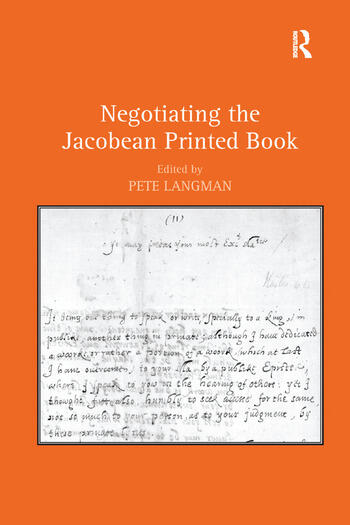 By examining the spaces where authors, printers and readers interact, Negotiating the Jacobean Printed Book highlights the manner in which contemporary culture and canon not only co-existed but mutually nourished and affected one another. An international group of book history scholars look beyond the traditional literary and canonical texts to explore, amongst other things, the physical nature of books and their place in Jacobean society. The contributors interrogate not just the texts themselves, but the habits, proclamations, letters and problems encountered by authors, printers and readers. Ranging from the funding of perhaps the most important book of the early Jacobean period, the 1611 AV Bible, and the ways in which it changed the balance of power in the King's Printers, to how the importation of Continental drill manuals by professional soldiers influenced the Privy council, the essays focus on the fissures which open up between practice and proclamation, between manuscript and press, and between print and parliament. Together these essays nuance our understanding of how print culture affected, and was affected by, wider cultural concerns; the volume constitutes a compelling contribution to both literary and historical studies of early modern England.

Contents: Preface; Introduction, Pete Langman; The King's Printers' Bible monopoly in the reign of James I, Graham Rees; Brought to book: purchases of special forms of prayers in English parishes, 1558-1640, Natalie Mears; Prayer Book, polemic, and performance, Sharon Arnoult; Print in the time of Jacobean parliaments, Cyndia Susan Clegg; Printed and censored at the same time for one and the same statement? The fate of Georges Hakewill's writings in the context of the Spanish match, Andreas Pecar; John Donne, James I, and the dilemmas of publication, Jane Rickard; Francis Bacon, King James and the private revision of public negotiations, Pete Langman; The evolution of the English drill manual: soldiers, printers and military culture in Jacobean England, David R. Lawrence; An epilogue, R. MacGeddon; Bibliography; Index.

'McLeod’s illustrations along with his ingenious analysis reveals hitherto hidden evidence for the production methods of early modern books. It will make enjoyably necessary reading for textual scholars.' Renaissance Quarterly [Negotiating the Jacobean Printed Book] is an important read for anyone researching literary and historical studies of early modern England in general, as well as the King James Bible, censorship and debate, and ecclesiastical and political texts. The Library 'The broad range of subjects, the originality and the consistent high quality of the essays make this volume indispensible for anyone who is interested in Jacobean print culture. On a wider scale, these essays demonstrate the fruitfulness of bibliography and book history as an approach to literary and historical concerns. They show how approaching Jacobean society through the study of the book allows us to gain a better understanding of this period by providing a refreshing perspective on history, culture and society.' CILIP Rare Books and Special Collections Group Newsletter 'While the essays target a specific audience, especially those interested in the development of print culture during the Jacobean age, Negotiating the Jacobean Printed Book is a must-read for any scholar of print history. All articles are well footnoted; there is an excellent and substantial bibliography and in the case of the epilogue, well-chosen illustrations. The reader will come away with a greater appreciation of the development of print and its impact.' Sixteenth Century Journal '... its efforts at foregrounding the pressures and processes by which written work was produced and circulated-particularly in its remarkable final essay-render it a valuable contribution to literary and textual scholars.' Seventeenth-Century News