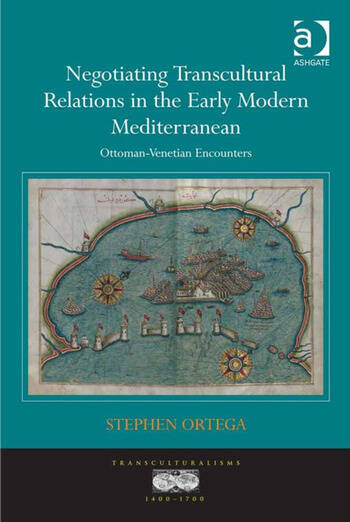 Negotiating Transcultural Relations in the Early Modern Mediterranean is a study of transcultural relations between Ottoman Muslims, Christian subjects of the Venetian Republic, and other social groups in the sixteenth and seventeenth centuries. Focusing principally on Ottoman Muslims who came to Venice and its outlying territories, and using sources in Italian, Turkish and Spanish, this study examines the different types of power relations and the social geographies that framed the encounters of Muslim travelers. While Stephen Ortega does not dismiss the idea that Venetians and Ottoman Muslims represented two distinct communities, he does argue that Christian and Muslim exchange in the pre-modern period involved integrated cultural, economic, political and social practices. Ortega's investigation brings to light how merchants, trade brokers, diplomats, informants, converts, wayward souls and government officials from different communities engaged in similar practices and used comparable negotiation tactics in matters ranging from trade disputes, to the rights of male family members, to guarantees of protection. In relying on sources from archives in Venice, Istanbul and Simancas, the book demonstrates the importance of viewing Mediterranean history from a variety of perspectives, and it emphasizes the importance of understanding cross-cultural history as a negotiation between different social, cultural and institutional actors.

'This valuable addition to the study of cross-cultural perspectives in the early modern Mediterranean involves a complex interplay of language, culture and religion. Ortega judiciously reassesses relationships between centre and periphery, pointing out that the perspectives of outlying dependencies had their own centrality. He views diplomacy and trade through the intriguing personal experiences of men and women who straddled the east-west divide. This book is particularly valuable for its inclusion of Spain within its geographical horizons. The skilful integration of macro- and micro-histories is lively, engaging and thought-provoking.' Deborah J. Howard, Cambridge University, UK