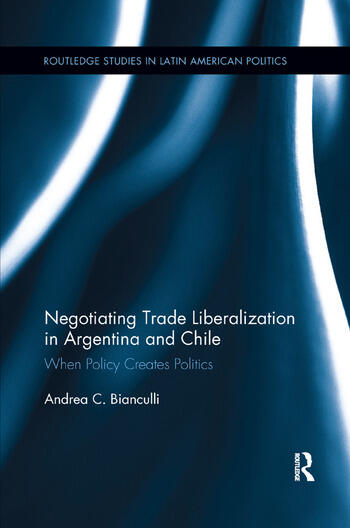 How do international negotiations affect domestic politics? Starting in the 1990s, countries throughout Latin America embarked on many and simultaneous negotiations. On the shifting ground of widening and deepening trade agendas and diverse arenas, what factors determined trade politics?

This book examines the domestic political dynamics triggered by South-South, North-South and multilateral agendas in Argentina and Chile between 1990 and 2005. Using a much-needed cross-negotiation and cross-country comparative perspectives, and through detailed empirical analyses of several key negotiations, it proposes an explanation that emphasizes the interplay between international negotiations and domestic trade politics, taken as the result of the complex and dynamic interdependencies and interrelations between state and society.

Informed by interviews with public officials, businesses and civil society, the analysis reveals that variation in the depth of agendas, the distributional effects and the uncertainty of political outcomes all have important consequences for domestic preference formation, collective action strategies and types of relationships. Given this, the variety of negotiations, when considered separately and comparatively, show that South-South, North-South and multilateral processes promote different patterns of trade politics. In sum, although national specificities and historical legacies are important, the book argues that trade policy comes first in creating domestic politics in Latin America.

Part I: Making sense of trade: Arguments and politics

Chapter 1: The contours of trade politics

"This volume examines the interaction between domestic and international negotiations in trade politics. With its focus on Argentina and Chile it provides an important empirical contribution to the debate." - Eugénia da Conceição-Heldt, Technical University of Munich