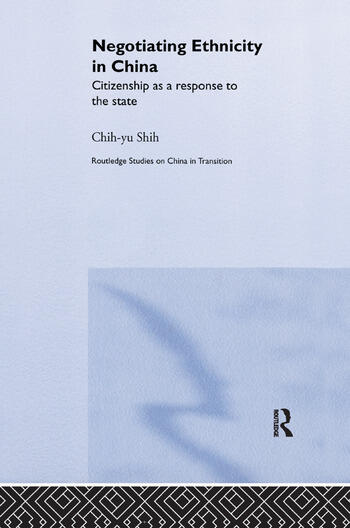 Negotiating Ethnicity in China: Citizenship as a Response to the State

This challenging study brings together anthropology and political science to examine how ethnic minorities are constructed by the state, and how they respond to such constructions.
Disclosing endless mini negotiations between those acting in the name of the Chinese state and those carrying the images of ethnic minority, this book provides an image of the framing of ethnicity by modern state building processes. It will be of vital interest to scholars of political science, anthropology and sociology, and is essential reading to those engaged in studying Chinese society.

Chih-yu Shih, National Chair Professor of 2001-2003 at National Taiwan University, teaches Chines politics, cultural studies and political psychology. He received his MPP from Harvard University and Ph.D from the University of Denver. In addition to 33 Chinese books, his English publications include Collective Democracy, State and Society in China's Political Economy, Symbolic War, China's Just World and The Spirit Chinese Foreign Policy. His ethnicity is Chinese Miao.

In this new work on ethnicity and identity, Chih-yu Shih, one of the most original and productive scholars writing about China, analyzes a variety of minority-group perspectives in their 'China moments' of dealing with the state ...providing new insights into what it means to be Chinese today. - Peter Van Ness, Contemporary China Centre, Australian National University

Professor Shih cites unprecedentedly rich material from a wide variety of Chinese minorities to show that people construct their ethnicities more variously than any of the usual theories would predict. The book remakes political anthropology as a kind of plate tectonics involving more collisions, subductions, withdrawals and contingencies than most accounts of ethnicities admit. Shih shows that such a view is needed to describe the nation that has become most populous. - Lynn White, Princeton University

Negotiating Ethnicity in China: Citizenship as a Response to the State