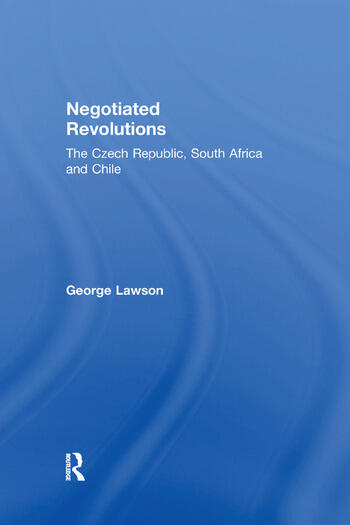 Straightforward histories of post-revolution States have all too often failed to provide sufficient context to rescue revolution, both as concept and practice, from the misplaced triumphalism of the contemporary world. In Negotiated Revolutions George Lawson marks a definitive departure in the study of radical political and socio-economic change, presenting a unique comparative analysis of three transformations from authoritarian rule to market democracy. Through the lens of international sociology the book critically considers the large scale processes of social and political revolution, bringing three apparently distinct transformations, from seemingly disparate authoritarian regimes and geographies, under a common rubric. With unique and novel conceptual analysis the book accurately locates both the potential and actuality of radical change in contemporary world affairs, processes usually mistakenly subsumed under the general framework of 'transitology'.

Dr George Lawson is a Tutorial Fellow in the Department of International Relations at The London School of Economics, UK.

'...a new advance in the study of radical change...Lawson identifies a set of transitions located in three continents that accompanied the end of the cold war in the late 1980s and early 1990s. While insisting on differences of history and political culture, Lawson nonetheless shows comprehensively how the global political context combined with the maturing of internal tensions to produce a new variant of revolutionary outcomes.' Professor Fred Halliday, London School of Economics and Political Science, UK 'This is a very important book. George Lawson provides by far the best comparative and international discussion of the negotiated revolutions that took place at the end of the Cold War, and analyses these events in light of his considerable insights into the on-going debates about theories of revolution.' Professor O.A. Westad, London School of Economics and Political Science, UK 'This is a timely, important, insightful and well-written book...it produces novel insights into the conception of revolution that all scholars interested in the topic should take heed of. Perhaps most significantly, it provides an excellent bridge between the complementary, though often sealed off, disciplines of Macro-Sociology/Historical Sociology and International Relations...I strongly recommend this book.' John M. Hobson, University of Sheffield, UK '...a valuable tool to criticize past research on revolutions for a number of shortcomings...[Lawson] provides a strong case for an "international sociology" as a conceptual framework for studying change in international relations as but a case of more comprehensive social change. His case-studies are highly readable, condensed accounts...' International Affairs 'Lawson does readers a favor by creating a model of revolution that allows one to retain what is useful from the past and combine it with what has changed in the present. Such scenarios may allow better predictions of future revolutionary activities...Recommended.' Cho