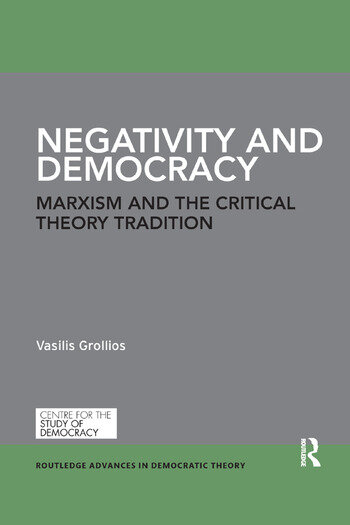 Negativity and Democracy: Marxism and the Critical Theory Tradition

The current political climate of uncompromising neoliberalism means that the need to study the logic of our culture—that is, the logic of the capitalist system—is compelling. Providing a rich philosophical analysis of democracy from a negative, non-identity, dialectical perspective, Vasilis Grollios encourages the reader not to think of democracy as a call for a more effective domination of the people or as a demand for the replacement of the elite that currently holds power. In doing so, he aspires to fill in a gap in the literature by offering an out-of-the-mainstream overview of the key concepts of totality, negativity, fetishization, contradiction, identity thinking, dialectics and corporeal materialism as they have been employed by the major thinkers of the critical theory tradition: Marx, Engels, Horkheimer, Lukacs, Adorno, Marcuse, Bloch and Holloway.

Their thinking had the following common keywords: contradiction, fetishism as a process and the notion of spell and all its implications. The author makes an innovative attempt to bring these concepts to light in terms of their practical relevance for contemporary democratic theory.

The Materialist Character of their Concept of Autonomy

Chapter 2: Dialectics and the Transition to Socialism in Late F. Engels’s Philosophy of

History: Freeing Marx from the ‘Withering Away of the State’ theory

Dialectics: The Critical Theorist and the Challenges of the 21st Century

Chapter 6: Determinate Negation of the One-dimensional Society: How Herbert

Chapter 8: The Descendants of Negative Dialectics. Dialectics and Democracy in Open

Vasilis Grollios is an independent postdoctoral researcher in political philosophy.

‘ … it (the book) definitely deserves our attention as it provides a perspective on all of the key figures of the first generation of the Frankfurt school, from an entirely different angle from that of the well know classical studies of Martin Jay and David Held, with which the book can be compared.’ — Evangelos Liotzis, Capital and Class

'How do we get out of here? We know that capitalism is a catastrophe for humanity, but we seem to be trapped. All our struggles seem to lead us back to the same starting point: the reproduction, in one way or another, of the logic of capital, the logic of death and destruction. We desperately need to break the grammar of capital, the conceptual and organisational framework that leads us round and round in circles. That is why Vasilis Grolios’s book is so important. It is not just an excellent development of an intellectual tradition: it confronts us with the need to break deadening, death-bringing mainstream theory. Read it.'  — John Holloway, Benemérita Universidad Autónoma de Puebla

‘I would highly recommend this book both to professional academics and students of political and social philosophy, sociology and political science, and to everyone non-academic who would like to develop a critical perspective of modern societies and their various and enduring pathologies.’ — Yiorgos Moraitis, Critical Sociology

‘Vasilis Grollios has written a timely and courageous book. His book is timely because, as Werner Bonefeld points out in his Foreword, ‘conventional democratic processes have been rocked by populist assertions about making this or that political economy great and strong’. His book is courageous because, as its subtitle indicates, it explores not merely specific formulations by a given theorist but Marxism and the ‘critical theory tradition’ as a whole.’ — Richard Gunn, Journal of Classical Sociology

‘… without question a work of important scholarship, in particular, his strong chapters on Adorno and Horkheimer as well as Marx demonstrate a powerful mind at work.’— Michael J. Thompson, Socialism and Democracy

Negativity and Democracy: Marxism and the Critical Theory Tradition