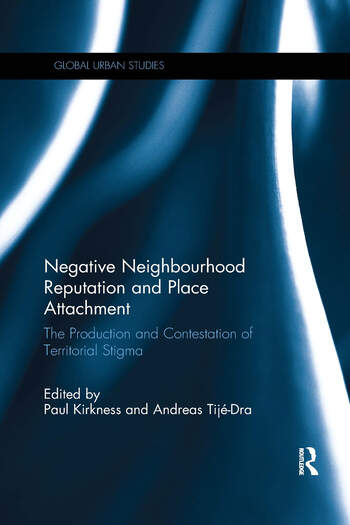 Negative Neighbourhood Reputation and Place Attachment: The Production and Contestation of Territorial Stigma

The concept of territorial stigma, as developed in large part by the urban sociologist Loïc Wacquant, contends that certain groups of people are devalued, discredited and tainted by the reputation of the place where they reside.

This book argues that this theory is more relevant and comprehensive than others that have been used to frame and understand ostracised neighbourhoods and their populations (for example segregation and the racialisation of place) and allows for an inclusive interpretation of the many spatial facets of marginalisation processes. Advancing conceptual understanding of how territorial stigmatisation and its components unfold materially as well as symbolically, this book presents a wide range of case studies from the Global South and Global North, including an examination of recent policy measures that have been applied to deal with the consequences of territorial stigmatisation. It introduces readers to territorial stigmatisation’s strategic deployment but also illustrates, in a number of regional contexts, the attachments that residents at times develop for the stigmatised places in which they live and the potential counter-forces that are developed against territorial stigmatisation by a variety of different groups.

2.The Stigmatization of Las Vegas and its Inhabitants: The Other Side of the Coin [Pascale Nédelec]

3. Imaginary Politics of the Branded City: Right-wing Terrorism as a Mediated Object of Stigmatization [Lucas Pohl]

4. The Stigmatisation of the Roma in Italy and France: Extensive Territorial Stigma and Ways of Coping With It [Gaja Maestri]

5. Redlining or Renewal? The Space-based Construction of Decay and its Contestation through Local Agency Brixton, Johannesburg [Christoph Haferburg and Marie Huchzermeyer]

6. The ‘Not So Good’, the ‘Bad’ and the ‘Ugly’: Scripting the ‘Badlands’ of Housing Market Renewal [Lee Crookes]

9. "This is my ‘Wo’": Making Home in Shanghai’s Lower Quarter [Yunpeng Zhang]

10. From Social Hell to Heaven? The Intermingling Processes of Territorial Stigmatization, Agency from Below and Gentrification in the Varjão, Brazil [Shadia Husseini de Araújo and Everaldo Batista da Costa]

12. You Have Got to Represent your Ends": Youth territoriality in London [Adefemi Adekunle]

13. Call it by its Name! Territory-ism and Territorial Stigmatisation as a Dynamic Model: The case of Old Naledi [Klaus Geiselhart]

Paul Kirkness is a Lecturer in Human Geography at the University of Erlangen-Nürnberg, Germany.

Andreas Tijé-Dra is a Human Geographer at the University of Erlangen-Nürnberg, Germany.

Negative Neighbourhood Reputation and Place Attachment: The Production and Contestation of Territorial Stigma