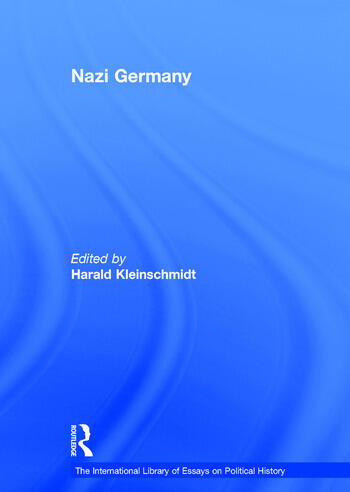 Contents: Series preface; Introduction; Part I The SS-State: 'Working towards the FÃ¼hrer'. Reflections on the nature of the Hitler dictatorship, Ian Kershaw; The anatomy of a volkspartei, JÃ¼rgen W. Falter and Detlef MÃ¼hlberger. Part II Elimination of Privacy: The 'private' became the 'public'. Wives as denouncers in the 3rd Reich, Vandana Joshi; Social penetration and police action: collaboration structures in the repertory of Gestapo activities, Klaus-Michael Mallmann. Part III Moulding Future Generations Through Sports and Youth Organizations: 34 gold medallists: Nazi women remember the 'kampfzeit', Herbert D. Andrews; Leni Riefenstahl's Olympia. A documentary film as instrument of propaganda?, Guido Rings; Creating conformity. The training of girls in the Bund Deutscher MÃ¤del, Lisa Pine. Part IV Economic Organization and the War: Plundering Jewish Property and Enforcing Slave Labour: Big business and the persecution of the Jews; the Flick concern and the 'Aryanization' of Jewish property before the war, L.M. Stallbaumer; Labour and extermination: economic interest and the primacy of weltanschauung in National Socialism, Ulrich Herbert; Triangle: foreign workers, German civilians and the Nazi regime. War and society in WÃ¼rttemberg, 1939-45, Jill Stephenson. Part V Abuse of Science: Medicine, male bonding and homosexuality in Nazi Germany, Harry Oosterhuis; Assessing neuropathological research carried out on victims of the 'euthanasia' programme, JÃ¼rgen Pfeiffer. Part VI Preparing the Holocaust: The Nazi party and its violence against the Jews, 1933-1939: violence as a historiographical concept, Armin Nolzen; Big business and 'Aryanization' in Germany, 1933-1939, Peter Hayes. Part VII Implementing the Holocaust: Were the perpetrators of genocide 'ordinary men' or 'real Nazis'? Results from 1500 biographies, Michael Mann; Struggle and survival. Jewish women in the anti-Fascist resistance in Germany, Simone Erpel. Part VIII Knowing and Remembering the Hol

Harald Kleinschmidt is Professor of History at the University of Tsukuba, Japan.