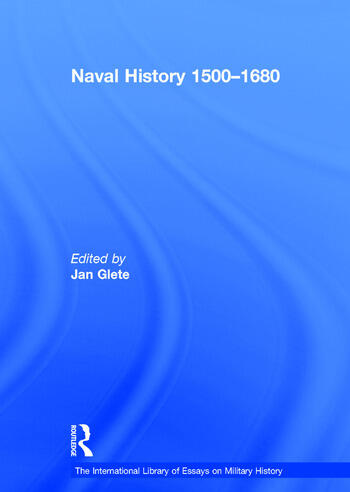 In recent decades historians have studied several new aspects of early modern naval history and placed it in a wider context than traditional studies of naval warfare. This volume brings together 23 studies on naval technology, policy-making and administration, tactics, strategy, operations and warfare on trade. They provide new insights and new ideas for further studies.

Contents: Introduction. Part I Technology: The early provision of artillery armament on Mediterranean war galleys, John F. Guilmartin, Jr; 'Many may peruse us': ribbands, moulds and models in the dockyards', Richard Barker; The Dreadnought revolution of Tudor England, Geoffrey Parker; In pursuit of the frigate, 1603-40, Andrew Thrush. Part II Policy and Administration: The evolution of the Ottoman seaborne empire in the age of oceanic discoveries, 1453-1525, Andrew C. Hess; Economic aspects of the construction of warships in Venice in the 16th century, Ruggiero Romano; Maturing of naval administration 1556-64, Tom Glasgow, Jr; Spanish Armada guns, I.A.A. Thompson; Armadas in an age of scarce resources: struggling to maintain the fleet in 17th-century Spain, David Goodman; Prelude to power: the crisis of 1649 and the foundation of English naval power, James S. Wheeler. Part III Tactics in Battle: The development of broadside gunnery, 1450-1650, N.A.M. Rodger; The action between Pater and Oquendo, 12 September, 1631, C.R. Boxer; The 'military revolution' afloat: the era of the Anglo-Dutch wars and the transition to modern warfare at sea, M.A.J. Palmer; The introduction of the single line ahead as a battle formation by the Dutch 1665-66, R.E.J. Weber. Part IV Strategy and Operations: The overrated adversary: Rhodes and Ottoman naval power, Palmira Brummett; Herring Wars: the Habsburg Netherlands and the struggle for control of the North Sea, ca. 1520-60, James D. Tracy; The recovery of St Andrews Castle in 1547: French naval policy and diplomacy in the British Isles, Elizabeth Bonner; The Thirty Years' War in the Mediterranean, R.C. Anderson; The Thirty Years' War in the Mediterranean, part II, R.C. Anderson; The Straits of Hormuz fleets: Omani-Portuguese naval rivalry and encounters, c. 1660-80, Glenn J. Ames. Part V Trade Warfare and Privateering: The organization and effects of Flemish privateering in the 17th century, R. Baetens; The Spanish Dunkirker

'The value of this volume it that is brings together a number of important articles on naval history in the early modern period.' Intl Jrnl of Maritime History '...such essays deserve to be republished...together, they form a complex portrait of the early modern maritime world...' The Northern Mariner '..there is plenty for the naval historian to feast upon in this anthology.' Sixteenth Century Journal