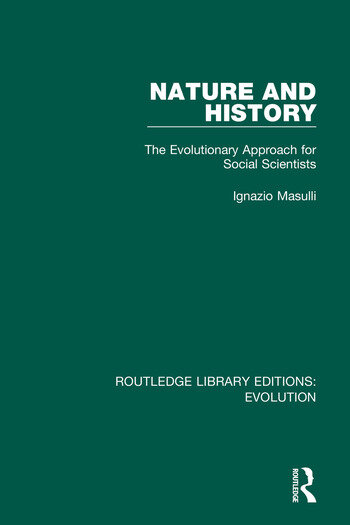 Nature and History: The Evolutionary Approach for Social Scientists

Originally published in 1990, Nature and History examines how Darwin’s theory of evolution has been expanded by scholars and researchers to include virtually every scientific discipline. The book presents a morphological analysis of historical and social sciences – sciences which have traditionally have been viewed as too random in their progressions to conform to a model. Through the evaluation of empirical and factual evidence, the book builds a case for an evolutionary paradigm which encompasses both natural and social sciences, and presents the form’s adaptiveness in working historical models.

Part I: The Paradigms of Form

1 Synthesis of Biological and Psychological Processes

2. The Nature-Knowledge Nexus and the Synthesis of Form

3. Nature and History: The Problem of a Unitary Conception of Reality

5. Toward a Unified Perspective: Form and Historical Knowledge

6. The Dynamics of Change in Historical Processes: Some Examples

Bibliography to Part I

Nature and History: The Evolutionary Approach for Social Scientists