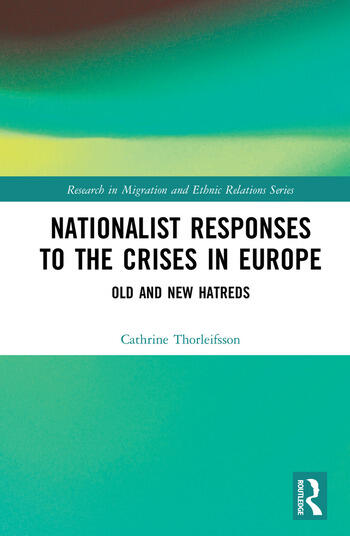 Nationalist Responses to the Crises in Europe: Old and New Hatreds

The last few years have witnessed a remarkable resurgence of populist nationalism as indicated by Brexit, the Trump presidency and the rise of radical parties of the far right. Nationalist Responses to the Crises in Europe examines the drivers, methods and local appeal of populist nationalism. Based on multi-sited fieldwork in England, Hungary and Norway, Cathrine Thorleifsson explores the various material conditions, historical events and social contexts that shape distinct forms of xenophobia and intolerance toward migrants and minorities. Combining analysis of the discourses propagated by populist radical right parties like the UK Independence Party, Fidesz, Jobbik and the Norwegian Progress Party with an analysis of the fears and concerns of supporters, Thorleifsson develops wider conclusions about the drivers and character of populist nationalism and the way in which these differ across national contexts. An empirically grounded study of how the demand and supply sides of populist nationalism are reconfigured in response to the globalized crises of economy, culture and displacement, this book will appeal to scholars of anthropology, sociology and politics with interests in nationalism, populism, the radical right and contemporary xenophobia

1. From Coal to Ukip: The Struggle Over Identity in Post-Industrial Doncaster

2. In Pursuit of Purity: Populism and The Politics of Whiteness

4. The Swedish Dystopia: Violent Imaginaries of The Radical Right

5. Human Waste in The Land of Abundance: Prejudice and Ambivalence Towards Itinerant Roma

Cathrine Thorleifsson is a researcher at the Centre for Research on Extremism at the University of Oslo, Norway. She earned a PhD in Anthropology from the London School of Economics and Political Science in 2012, and from 2014-2017 she was a postdoctoral fellow at the ERC-funded project "Overheating: the three crises of globalization." She is the author of Nationalism and the Politics of Fear in Israel: Race and Identity on the Border with Lebanon (2015). ?

Nationalist Responses to the Crises in Europe: Old and New Hatreds