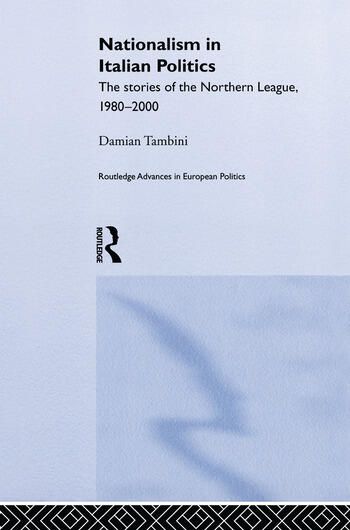 Nationalism in Italian Politics: The Stories of the Northern League, 1980-2000

This book is the first full-length study available in English to trace the extraordinary history of the Italian Northern Leagues during the 1980s and 1990s. At a time when the postwar First Republic entered a crisis amid corruption scandals, the Leagues acted as one of the main protest actors and grew at an unprecedented rate.
Drawing on electoral and survey data, existing research, eyewitness accounts of protest events and interviews with activists and leaders, this book provides the definitive account of the movement. Damian Tambini analyses why the movement was so successful in mobilising support, and focuses on its most novel aspect: its use of nationalism. The new regionalist movements in Northern Italy, which were unified into the Northern League in 1990, had a huge influence on Italian politics during the period.
Written for scholars interested in nationalism, ethnicity and citizenship; and for specialists in European Studies, Italian and ethnic studies, Nationalism in Italian Politics draws on the best Italian and international research to thoroughly analyse the movement, and update classic studies of nationalism in the age of media spectacle.

Damian Tambini is Senior Research Fellow at the Institute for Public Policy Research in London; and is also a Research Associate at the London School of Economics. His publications include Cyberdemocracy and Markets, Citizens and States.

'It is certainly a 'must' for inclusion on the reading lists of most Italian politics courses.' - James Newell, The Global Review of Ethnopolitics Vol.1 no.2, December 2001

'The book will make an excellent starting-point for further research and reflection by Italian specialists who wish to begin to restore the balance between study of left-wing movements and parties and those of the right.' - Rpger Absalam, Sheffield Hallam University, Modern Italy 2002

'This book is a useful and interesting addition to works on the Northern League, particualrly becasue it adopts an innovative approach and ventures into relaitvely unexplored paths.' - Anna Bull, Journal of Multilingual and Multicultural Development

Nationalism in Italian Politics: The Stories of the Northern League, 1980-2000