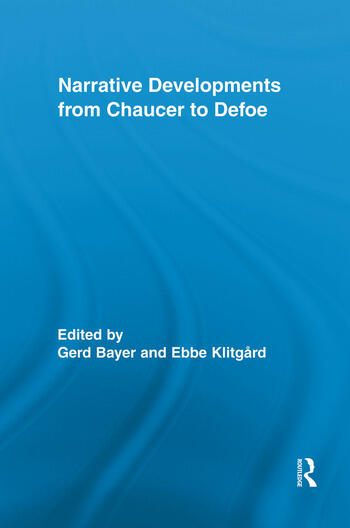 Narrative Developments from Chaucer to Defoe

This collection analyzes how narrative technique developed from the late Middle Ages to the beginning of the 18th century. Taking Chaucer’s influential Middle English works as the starting point, the original essays in this volume explore diverse aspects of the formation of early modern prose narratives. Essays focus on how a sense of selfness or subjectivity begins to establish itself in various narratives, thus providing a necessary requirement for the individuality that dominates later novels. Other contributors investigate how forms of intertextuality inscribe early modern prose within previous traditions of literary writing. A group of chapters presents the process of genre-making as taking place both within the confines of the texts proper, but also within paratextual features and through the rationale behind cataloguing systems.

A final group of essays takes the implicit notion of the growing realism of early modern prose narrative to task by investigating the various social discourses that feature ever more strongly within the social, commercial, or religious dimensions of those texts. The book addresses a wide range of literary figures such as Chaucer, Wroth, Greene, Sidney, Deloney, Pepys, Behn, and Defoe. Written by an international group of scholars, it investigates the transformations of narrative form from medieval times through the Renaissance and the early modern period, and into the eighteenth century.

Gerd Bayer is Senior Lecturer in the English department at Erlangen University, Germany.

Narrative Developments from Chaucer to Defoe