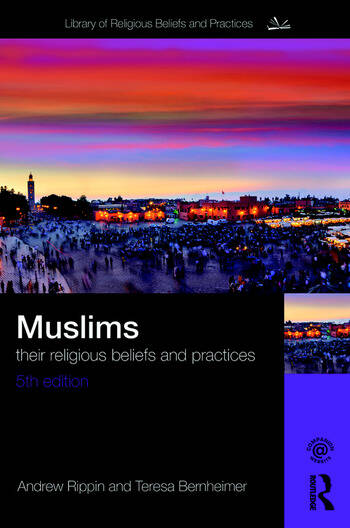 Muslims: Their Religious Beliefs and Practices

Muslims: Their Religious Beliefs and Practices offers a survey of Islamic history and thought from the formative period of the religion to the contemporary period. It examines the unique elements which have combined to form Islam, in particular, the Qurʾān and perceptions of the Prophet Muḥammad, and traces the ways in which these ideas have interacted to influence Islam’s path to the present. Combining core source materials with coverage of current scholarship and of recent events in the Islamic world, Bernheimer and Rippin introduce this hugely significant religion, including alternative visions of Islam found in Shi’ism and Sufism, in a succinct, challenging, and refreshing way. The improved and expanded fifth edition is updated throughout and includes new textboxes.

With detailed illustrations and a new companion website, Muslims is the ideal introduction for students who wish to explore the key issues of Muslims, from the Qurʾān to Islamic feminism, to issues of identity, Islamophobia, and modern visions of Islam.

Preface to the fifth edition

14 The Qurān and modernity

15 Issues of identity: ritual and politics

16 Women, intellectuals, and other challenges

17 Perceptions of Muslims in the twenty-first century

was Professor of History and former Dean of the Faculty of Humanities at the University of Victoria, Canada, and among the foremost scholars of the Qur?an.

Muslims: Their Religious Beliefs and Practices