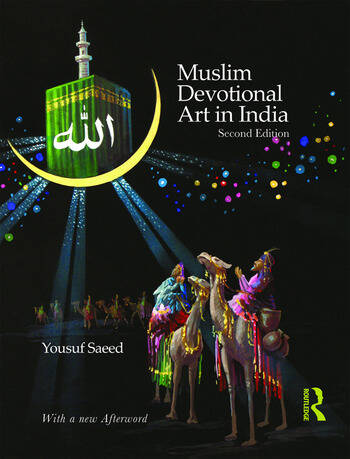 This book highlights the history of Islamic popular devotional art and visual culture in 20th-century India, weaving the personal narrative of the author’s journey through his understanding of the faith. It begins with an introductory exploration of how the basic and universal image of Mecca and Medina may have been imported into Indian popular print culture and what variants it resulted in here. Besides providing a historical context of the pre-print culture of popular Muslim visuality, the book also explores the impact the 1947 Partition of India may have made on the calendar art in South Asia. A significant portion of the book focuses on the contemporary prints of different localised images found in India and what role these play in the users’ lives, especially in the augmentation of their popular faith and cultural practices. The volume also compares the images published in India with some of those available in Pakistan to reflect different socio-political trajectories. Finally, it discusses why such a vibrant visual culture continues to thrive among South Asian Muslims despite the questions raised by the orthodoxy on its legitimacy in Islam, and why images and popular visual cultures are inevitable for popular piety despite the orthodox Muslims’ increasing dissociation from them.

This work is one of the first books on Indian Muslim poster art, with rare images and simple narratives, anecdotes about rituals, ceremonies and cultural traditions running parallel to research findings. This second edition contains a new Afterword that discusses challenges to religious plurality arising on account of changing political landscapes, economic liberalisation, technology and new media, and socio-religious developments. It will appeal to the lay reader as well as the specialist and will be especially useful to researchers and scholars in popular culture, media and cultural studies, visual art and performance studies, and sociology and social anthropology.

Introduction: The Duller the Better 1. The Image of Mecca in India 2. The Popular Culture of Indian Muslims Before Print 3. Heroes, Portraits and Miraculous Powers 4. Images of Use and the Use of Images 5. Images of the Two Nations 6. Postscript: Why Do Popular Images Thrive in the Muslim World Despite…? Afterword to the Second Edition: Challenges to Religious Plurality

Yousuf Saeed is an independent filmmaker and researcher, and project director of Tasveer Ghar, a digital archive of South Asian popular visual culture. Starting his career in educational television in 1990 by co-directing Turning Point, a science-based TV series for Doordarshan, India’s public broadcaster, he moved on to directing documentary films on a variety of subjects, such as Ladakh, Sufi heritage, and India’s syncretic cultural traditions. His documentary films Basant, The Train to Heaven, Khayal Darpan, Khusrau Darya Prem Ka, and Campus Rising have been shown at numerous national and international film festivals as well as on TV channels. He has worked at the Encyclopaedia Britannica (India) as image editor on many of its India-specific publications. He has also been a Sarai Fellow (at the Centre for the Study of Developing Societies, New Delhi, 2004), an Asia Fellow (at the Asian Scholarship Foundation, Bangkok, 2005) and a Margaret Beveridge Senior Research Fellow (at Jamia Millia Islamia, New Delhi, 2009) for various research-based projects on media and popular art. He has made lecturing tours in Europe and America, where he has shown his films as well as images from his extensive collection of popular Muslim devotional art. He also co-edited Visual Homes, Image Worlds: Essays from Tasveer Ghar (2015) besides contributing to several recent publications.

‘The breadth of coverage of issues related to Muslim popular visual culture . . . for insights, as well as the extraordinarily rich collection of images that will serve as a comprehensive reference for many years to come, this book is highly recommended to scholars and other readers alike.’

‘Saeed takes us on a journey throughout India, where we encounter visual art [in Islam] in the form of calligraphy, chromolithographs of Sufi saints, architecture, items of clothing, and ritual paraphernalia in abundance, especially within and around the compounds of the many dargahs that dot the landscape of India.’

‘Yousuf Saeed’s delightful book provides readers with a rare glimpse into the visual culture of Muslim communities in South Asia. Drawing on the author’s personal experiences and extensive research, it sensitively explores diverse aspects of Muslim devotional life through a vivid and vibrant tradition of popular art. Masterfully narrated and beautifully illustrated, this unique book is "a must read" for anyone interested in the popular religion of South Asia.’

‘In this welcome volume, Yousuf Saeed surveys significant examples of the colourful lithographs and other images that form a part of the devotional experience of many Indian Muslims. The work is historical, with attention to the importance of technological innovations in photography, print and transportation. It also takes into account central themes in cultural and political history, including the impact of Partition, and devotional and reformist currents that alternately encouraged and disapproved of many of these images. This is a vivid account on a subject that will be of wide interest to lay and specialist readers alike.’

‘Yousuf Saeed writes with passion and verve, taking his readers along the alleys of his own experience and observations of Islam as practised in South Asia. He explores the South Asian Muslims’ appetite for images in their everyday religious piety, together with an incisive discussion of its context. In the process, he raises several significant questions to enable us to appreciate the distinctive features of indigenous Muslim culture. He also shows how the recent melee of "Arabisation" and pristine purity threatens to affect and disfigure the nuanced beauties of its icons.’

‘This highly original and indeed path-breaking study of Muslim devotional art in India is full of visual beauty and intellectual surprises. It is destined to become the most important precedent and source for future studies on the important and hitherto-neglected subject of Islamic visual culture in South Asia.’