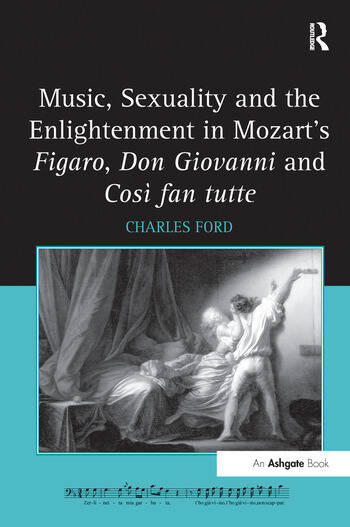 Music, Sexuality and the Enlightenment explains how Mozart's music for Le nozze di Figaro, Don Giovanni and CosÃ¬ fan tutte 'sounds' the intentions of Da Ponte's characters and their relationships with one another. Mozart, by way of the infinitely generative and beautiful logic of the sonata principle, did not merely interpret Da Ponte's characterizations but lent them temporal, musical forms. Charles Ford's analytic interpretation of these musical forms concerns processes and structures in detail and at medium- to long-term levels. He addresses the music of a wide range of arias and ensembles, and develops original ways to interpret the two largely overlooked operatic genres of secco recitative and finales. Moreover, Ford presents a new method by which to relate musical details directly to philosophical concepts, and thereby, the music of the operas to the inwardly contradictory thinking of the European Enlightenment. This involves close readings of late eighteenth-century understandings of 'man' and nature, self and other, morality and transgression, and gendered identities and sexuality, with particular reference to contemporary writers, especially Goethe, Kant, Laclos, Rousseau, Sade, Schiller, Sterne and Wollstonecraft. The concluding discussion of the implied futures of the operas argues that their divided sexualities, which are those of the Enlightenment as a whole, have come to form our own unquestioned assumptions about gender differences and sexuality. This, along with the elegant and eloquent precision of Mozart's music, is why Figaro, Giovanni and CosÃ¬ still maintain their vital immediacy for audiences today.

Charles Ford is an associate fellow of the Institute of Musical Research, University of London, UK

'In this highly nuanced and multi-disciplinary study, Charles Ford shows us how tonal identifications foster nonconceptual forms of significance. Through music we feel, and through feeling we come to know (and know how to make) difference. Ford guides us adroitly, aria by aria, scene by scene, in Mozart's art of tonal identification. Music, Sexuality and the Enlightenment illuminates music as an insidious and insinuating medium of social performance.' Tia DeNora, University of Exeter, UK 'Charles Ford's new book is a major contribution to writing and thinking about a body of music that continues to occupy a highly influential position in musical culture. The book achieves a synthesis of musical detail, interpretation, and ideological framing of a remarkable kind, which demonstrates - contrary to simplistic notions of the Enlightenment - how fascinatingly contradictory, unstable and shot-through with conflict the music, thought and writing actually are.' Eric Clarke FBA, Oxford University 'Ford's excellent analysis succeeds in illuminating how the operas depict the complex relationship between gender roles, sexuality, and desire as it plays out in the music... Ashgate has produced an excellent volume which is readable, well laid out, contains few typos and is intelligently organized... The book will become a valued contribution to our understanding of Mozart.' New perspectives on the Eighteenth Century '...a worthwhile contribution to Mozart studies and eighteenth-century opera studies... ' Intersections