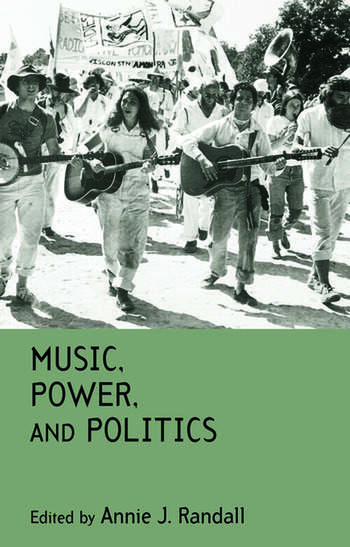 Music, Power, and Politics presents sixteen different cultural perspectives on the concept of music as a site of socio-political struggle. Essays by scholars from around the world explore the means by which music's long-acknowledged potential to persuade, seduce, indoctrinate, rouse, incite, or even silence listeners, has been used to advance agendas of power and protest. The essays included examine: music used to convey political ideology in Nazi Germany, apartheid-era South Africa, and modern-day North Korea postcolonial musical efforts to reclaim ethnic heritage in Serbia and the Caribbean music as a means of establishing new cultural identities for recently empowered social groups in the UK and Brazil the subversion of racial stereotypes through popular music in the USA music as a tool of popular resistance to oppressive government policies in modern day Iran and the Bolivian Andes

"This volume is a full frontal attack on the commonplace view of music as little more than innocent diversion or entertainment. Touching on folk revivals, totalitarian spectacles, censorship, and resistance, the essays in Music, Power, and Politics richly consider the play of power in music and lead us to a heightened awareness of music's transformative power." -- Gage Averill Dean, Faculty of Music, University of Toronto
"Music, Power, and Politics compellingly demonstrates the multifaceted ways in which music has been used to enact specific political and social agendas. These essays insist that we interrogate the relationship between power and music across the globe. A bold and remarkable collection." -- Ellie M. Hisama, Director, Institute for Studies in American Music, Brooklyn College, CUNY