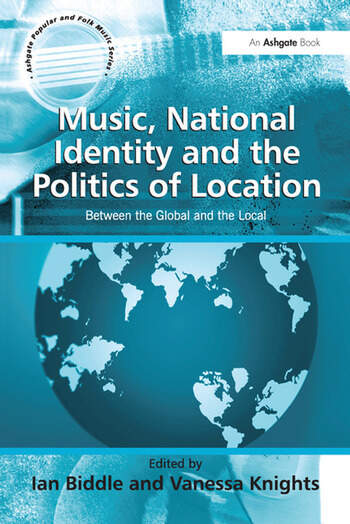 Music, National Identity and the Politics of Location: Between the Global and the Local

How are national identities constructed and articulated through music? Popular music has long been associated with political dissent, and the nation state has consistently demonstrated a determination to seek out and procure for itself a stake in the management of 'its' popular musics. Similarly, popular musics have been used 'from the ground up' as sites for both populist and popular critiques of nationalist sentiment, from the position of both a globalizing and a 'local' vernacular culture. The contributions in this book arrive at a critical moment in the development of the study of national cultures and musicology. The book ranges from considerations of the ideological focus of cultural nationalism through to analyses of musical hybridity and musical articulations of other kinds of identities at odds with national identity. The processes of global homogenization are thereby shown to have brought about a transitional crisis for national cultural identities: the evolution of these identities, particularly with reference to the concept of 'authenticity' in music, is situated within broader debates on power, political economy and constructions of the self. Theorizations of practice are employed after the manner of Bourdieu, Gramsci, Goffman, Gadamer, Habermas, Bhabha, Lacan and Zizek. Each contribution acts as a case study to characterize the strategies through which differing modes of musical discourse engage, critique or obscure discourses on national identity. The studies include discussions of: musical representations of Irishness; the relationship between Afropop and World Music; Norwegian club music; the revival of traditional music in Serbia; resistance to cultural homogeneity in Brazil; contemporary Uyghur song in Northwest China; rap and race in French society; technobanda from the barrios of Los Angeles, and Spanish/Moroccan raÃ¯. In this way, the book seeks to characterize the ideological configurations that help to activate and sustain hegemonic, amb

Ian Biddle is Senior Lecturer and Head of Postgraduate Studies in Music at Newcastle University, UK. He is a cultural theorist and musicologist, working on a range of topics in music and sound-related areas. His work ranges from the cultural history of music and masculinity, music in the Holocaust, theorising music's intervention in communities and subjectivities, sound, soundscapes and urban experience, and the politics of noise. He has interests in memory studies, sound studies, Italian workerist and autonomist theory, psychoanalysis and theoretical approaches to 'affective' states. He is co-founder and co-ordinating editor (with Richard Middleton) of the journal Radical Musicology.

Shortlisted for the 2008 AMS Ruth A. Solie Award (for an outstanding collection of musicological essays). ’...definitively a worthy contribution to the library of scholars interested in a more differentiated view of current processes.’ Popular Music ’... the high calibre of the individual chapters, the inclusion of commentaries by leading researchers, and the editors' intellectually robust conceptualization all result in a polished and engaging text. It will be of interest to scholars of music and other disciplines where location, politics and nationhood are key issues, and it makes a fine contribution to the evolution of the discourse of music and globalization.’ Lied und populÃ¤re Kultur 'This book makes a stimulating contribution to the literature on popular music and national identity, and it has much to offer ethnomusicologists interested in globalisation theory and the politics of popular music.' Ethnomusicology Forum

Music, National Identity and the Politics of Location: Between the Global and the Local