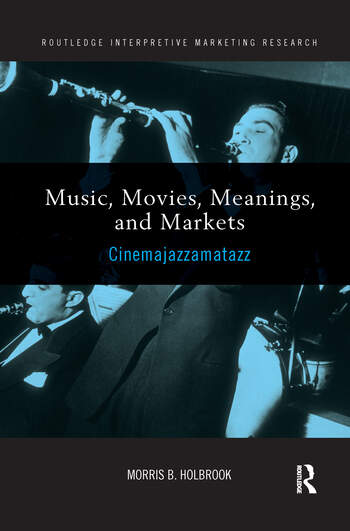 Music, Movies, Meanings, and Markets focuses on macromarketing-related aspects of film music in general and on the cinemusical role of ambi-diegetic jazz in particular.  The book examines other work on music in motion pictures which has dealt primarily with the traditional distinction between nondiegetic film music (background music that comes from off-screen and is not audible to the film’s characters, to further the dramatic development of plot, character, or other themes) and diegetic music (source music produced on-screen and/or that is audible to the film’s characters, adding to the realism of the mise-en-scène without contributing much to other dramatic meanings). This book defines, describes, and illustrates another hitherto-neglected type of film music –ambi-diegetic film music, which appears on-screen but which contributes to the dramatic development of plot, character, and other themes.

Consistent with an interest in macromarketing, such ambi-diegetic film music serves as a kind of product placement (suitable for commercialization via the cross-promotion of soundtrack albums, for example) and plays a role in product design. It also provides one type of symbolic consumer behavior that indicates choices made by film characters when playing-singing-listening-or-dancing in ways that reveal their personalities or convey other cinemusical meanings. Morris Holbrook argues that ambi-diegetic film music sheds light on various social issues –such as the age-old tension between art and entertainment as it applies to the contrast between creative integrity and commercialization. Music, Movies, Meanings, and Markets explores the ways in which ambi-diegetic jazz contributes to the development of dramatic meanings in various films, many of which address the art-versus-commerce theme as a central concern.

Part I: Introduction: Ambi-Diegetic Music in Motion Pictures  1.The Role of Ambi-Diegetic Film Music in the Product Design of Hollywood Movies: Macromarketing in La-La-Land  Part II: Ambi-Diegetic Jazz and the Development of Character  2. Ambi-Diegetic Film Music As a Product-Design and -Placement Strategy: The Crosby Duets in High Society (1956)  3. The Cinemusical Role of "My Funny Valentine" In The Fabulous Baker Boys (1989) and The Talented Mr. Ripley (1999) Part III: The Plot Thickens: Cinemusical Meanings in the Crime-Plus-Jazz Genre  4. Pete Kelly’s Blues (1955)  5. The Cotton Club (1984)  6. Kansas City (1996)  Part IV: Jazz, Films, and Macromarketing Themes: Art versus Commerce in the Young Man-With-A-Horn Genre  7. Young Man with a Horn (1949)  8. Paris Blues (1961)  9. Mo’ Better Blues (1990)  Part V: Ambi-Diegetic, Nondiegetic, and Diegetic Cinemusical Meanings in Motion Pictures: Commerce, Art, and Brando Loyalty ... Or ... De Niro, My God, To Thee  10. Commerce And New York, New York (1977): He’s Delightful; He’s Delicious; He’s ... De Niro  11. Art and Heart Beat (1980): Stars Fell on Algolagnia  12. Brando Loyalty and The Score (2001): How Do You Keep The Music Paying?  Part VI: God Is In the Details  13. His Eye Is On the Sparrow: Small-But-Significant Cinemusical Moments in Jazz Film Scores by Miles Davis and John Lewis  14. Small-But-Significant Implications of the Man Who Isn’t There In Sweet Smell of Success (1957)  Part VII: Jazz Biopics As Tragedy and Comedy: Pivotal Ambi-Diegetic Cinemusical Moments in Tragedepictions and Comedepictions of Jazz Heroes  15. When Bad Things Happen To Great Musicians: The Troubled Role of Ambi-Diegetic Jazz in Three Tragedepictions of Artistic Genius on the Silver Screen  16. A Cinemusicaliterary Analysis of the American Dream As Represented By Biographical Jazz Comedepictions in the Golden Age of Hollywood Biopics: Blow, Horatio, Blow; O, Jakie, O; Go, Tommy, Go; No, Artie, No

Morris B. Holbrook is the W. T. Dillard Professor Emeritus of Marketing in the Graduate School of Business at Columbia University. His research has covered a wide variety of topics in marketing, consumer behavior, and related fields – with a special focus on communication in general and on aesthetics, semiotics, hermeneutics, art, and entertainment in particular. Recent books include Consumer Research (1995); Consumer Value (edited, 1999); and Playing the Changes on the Jazz Metaphor (2007).