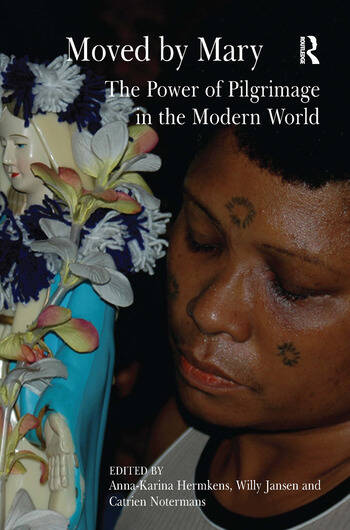 Moved by Mary: The Power of Pilgrimage in the Modern World

The Virgin Mary continues to attract devotees to her images and shrines. In Moved by Mary, anthropologists, geographers and historians explore how people and groups around the world identify and join with Mary in their struggle against social injustice, and how others mobilize Mary to impose ideas and rules and legitimize acts of violence and suppression. Far from an outdated practice of little relevance to the modern world, Marian pilgrimage expresses the deep and urgent concerns of a wide range of people. With examples of Marian pilgrimages from all over the world, Moved by Mary explores the ways in which men and women of different ages and religious, political, social-economic and ethnic backgrounds empower themselves to deal with modern-day issues with MaryÂ´s help. The ethnographic cases reveal the cultural and devotional variation of Marian pilgrimage, but also global similarities. Collectively, the contributors to Moved by Mary show how in many places religion dramatically suffuses everyday life.

Contents: Introduction: the power of Marian pilgrimage, Anna-Karina Hermkens, Willy Jansen and Catrien Notermans; Part I Negotiating Power Through Mary's Imagery: Mary on the margins? The modulation of Marian imagery in place, memory, and performance, Simon Coleman; Marian images and religious identities in the Middle East, Willy Jansen; Aura and the inversion of Marian pilgrimage: Fatima and her statues, David Morgan. Part II Marian Pilgrimages and Political, Religious, and Economic Struggles: Mary's journeys through the warscape of Bougainville, Anna-Karina Hermkens; Mary in Poland: a Polish master symbol, Cathelijne de Busser and Anna Niedzwiedz; Mary, mother of all: finding faith at the sacred source of Sendangsono, Indonesia, Ien Courtens; Religious materialization of neoliberal politics at the pilgrim site of the Virgin at UrkupiÃ±a in Bolivia, Sanne Derks. Part III Marian Pilgrimage and Family Relations: Connecting the living and the dead: re-membering the family through Marian devotion, Catrien Notermans; Caring for others: Mary, death, and the feminization of religion in Portugal, Lena GemzÃ¶e; Family pilgrimages to the sea in Guadeloupe: matrifocality under pressure, Janine Klungel. Part IV Lived Religion in the Context of the Official Church: Paradoxes of Marian apparitional contestation: networks, ideology, gender, and the Lady of all nations, Peter Jan Margry; Legitimization or suppression? The effects of Mary's appearances at Knock, Ireland, Edith Turner; Abundant history: Marian apparitions as alternative modernity, Robert Orsi; Epilogue: the many faces of Mary, Jill Dubisch; Bibliography; Index.

Anna-Karina Hermkens has a background in theoretical archaeology and cultural anthropology. She obtained her PhD in 2005 with a study on material culture and gender in Papua New Guinea (2005). Articles on this topic were published amongst others in: Shadows of New-Guinea, Arts from the Great Island of Oceania in the Barbier-Mueller Collections (2007); the Journal of Pacific History (2007) and Visual Anthropology (2007). Hermkens is currently working as a project-coordinator and researcher in the program 'The Power of Marian Pilgrimage'. This has resulted in several articles, amongst others in: Anthropology Today (2007), Culture and Religion (2007) and Oceania (2008). In cooperation with Willy Jansen and Catrien Notermans, she organized the international conference on "The Power of Marian pilgrimage" in Nijmegen (Netherlands) from 1-3 February 2007 (http://www.ru.nl/igs/powerofpilgrimage).

'This book takes readers on an extended Marian pilgrimage to numerous sites across the globe from Europe to the Middle East, Latin America and the Pacific, and confronts them with an abundance of both stationary and circulating images, saturated with Mary's presence. I found it a surprising and exhilarating journey.' Michael Lambek, University of Toronto, Canada 'Moved by Mary is a treasure trove, with surprising accounts of Marian pilgrimages and suggestive new approaches to the relations between humans and divine figures.' William A. Christian Jr, author of Visionaries, the Spanish Republic and the Reign of Christ ’... deserves to be included in any library that takes Mary and Marian devotion seriously... a substantive contribution to pilgrimage studies...’ Journal of Contemporary Religion ’An original and engaging read, Moved by Mary will be of interest to anyone concerned with religious practices, ecclesiology, ecumenical and interfaith relations, hagiography, and sociologies and psychologies of religion.’ Anglican and Episcopal History ’Some books are good, few are very good, but this book is better. It is well written and well thought and best of all: it provides new insights into an area of religious culture, which has attracted little scholarly attention - the contemporary cult of Virgin Mary.’ Nordic Journal of Religion and Society 'This excellent and readable book confirms - with fascinating hard-researched illustrations - the multivocal nature of the Marian pilgrimage cult worldwide and its competing interpretations. Representations of Mary, at her shrines and in her devotions, mirror the colours and contrasts of the Catholic tradition today. We are presented with compelling evidence for the continued passion and intensity of Marian devotion across the globe in the twenty-first century.' Fieldwork in Religion '... Moved by Mary is a superb collection of essays on Marian pilgrimage, covering such topics as gender, power, visual piety, rel

Moved by Mary: The Power of Pilgrimage in the Modern World