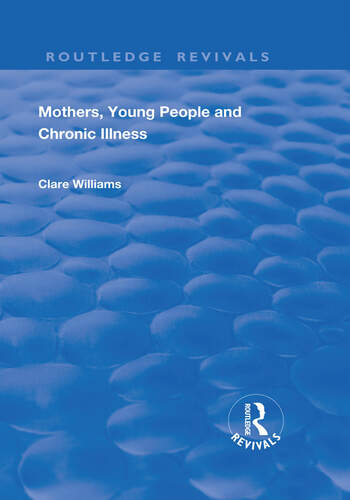 This title was first published in 2003: Although young people are generally very healthy, it has become clear that many of the health behaviours of young people can have serious consequences later in life. This is particularly so with the management of chronic illness, where poor management can result in serious long-term complications. This book explores how gender differentially affects both the ways in which young people manage chronic illness and the ways in which mothers care for their teenage sons and daughters. Until recently, where gender and health have been linked, the focus has typically been on women rather than men. However, there is growing interest in the health of men, with the recognition that masculinities and health interact in specific, sometimes detrimental ways. Most books examine either women’s, or less commonly, men’s health, but the comparative approach proposed reflects a growing academic and empirical trend which aims to develop new theoretical perspectives both on gender and on the relationship between gender and health. The book also challenges assumptions that gender is static, by exploring the effects of gender at a specific time of transition in the life course. The focus on adolescence is important, as it is seen by many to be the time when heterosexual values are most powerfully pursued and enforced, thus enabling interactions between gender and health to be thrown into relief. The approach adopted takes issue with many current ideas about young people, which tend to portray them as autonomous individuals, acting independently. For example, in terms of health care for young people with a chronic illness, health professionals generally adopt an individualistic approach, stressing the importance of independence for young people. Rather than seeing young people as purely autonomous, this book relocates them within families, in transition between childhood and adulthood and acting interdependently with other family members. Little is known about the complex deci

’The book highlights the importance of researching teenagers at a stage in the life course when gendered identities are thrown into sharp relief. This sensitive piece of research portrays mothers’ management of the chronic illness of their teenage sons and daughters. It is also much more than this, constituting grist to the mill in exploding that great illusion of our age: that autonomy is a realisable and unproblematic goal either for young men or for young women.’ Julia Brannen, Thomas Coram Research Unit, Institute of Education, London ’...an innovative and valuable exploration of the collaborative management of young people’s chronic conditions. Clare William’s analyses of gender issuesÂ also takes account of generational issues: how mothers, and to a lesser extent fathers, negotiate with daughters and with sons to reach the best possible outcome.’ Professor Berry Mayall, Institute of Education, University of London, UK '...an informative, easy-to-read text...Any health professional working with young people who are managing chronic conditions will find the blend between psychological and sociological perspectives useful in fine-tuning insight into complex contexts that surround adaptation to chronic illness. The writer has done an extraordinarily important piece of work. I recommend it to anyone who intends to work in this often-unrecognised traumatic area.' Journal of Family Studies 'This book - providing a clearly structured and well-written analysis of a study into the management of chronic illness by teenagers and the concerns of those caring for them - contributes to the neglected area of sociological study of young people and illness and to the sociology of care...This interesting sociological study gives voice to teenagers and their parents and consequently raises questions about the teenage-child constructed by law and whether it is possible to develop a legal framework which is more sensitive to the lived experience of illness