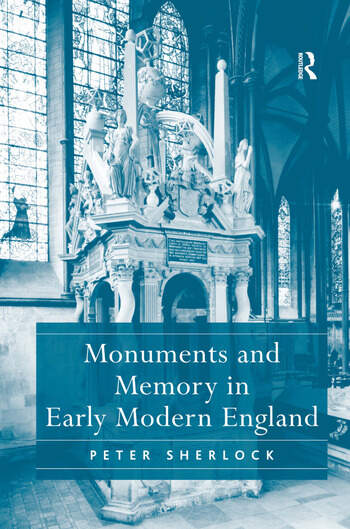 Funeral monuments are fascinating and diverse cultural relics that continue to captivate visitors to English churches, yet we still know relatively little about the messages they attempt to convey across the centuries. This book is a study of the material culture of memory in sixteenth and seventeenth-century England. By interpreting the images and inscriptions on monuments to the dead, it explores how early modern people wanted to be remembered - their social vision, cultural ideals, religious beliefs and political values. Arguing that early modern English monuments were not simply formulaic statements about death and memory, Dr Sherlock instead reveals them to be deliberately crafted messages to future generations. Through careful reading of monuments he shows that much can be learned about how men and women conceived of the world around them and shifting concepts of gender, social order and the place of humans within the universe. In post-Reformation England, the dead became superior to the living, as monuments trumpeted their fame and their confidence in the resurrection. This study aims to stimulate historians to attempt to reconstruct and engage with the world view of past generations through the unique and under-utilised medium of funeral monuments. In so doing it is hoped that more light may be shed on how memory was created, controlled and contested in pre-modern society, and encourage the on-going debate about the ways in which understandings of the past shape the present and future.

Peter Sherlock is an Australian Research Council Postdoctoral Fellow in the School of Historical Studies, University of Melbourne, Australia.

’... provides a valuable and wide-ranging contribution to the understanding of early modern memorializing practices...’ Renaissance Quarterly ’This excellent book is essential reading for anyone interested in the monuments of Early Modern England; indeed its Introduction is highly recommended to anyone interested in monuments... Peter Sherlock has written a humane, learned and illuminating book which will be fundamental to the study of church monuments.’ Church Monuments ’This is a groundbreaking study... The text is copiously illustrated... English tombs have had their interpreters but this text offers many fresh ideas mostly owing to the religious import which Sherlock reads into these post-Reformation statements to their present and future.’ Parergon ’Coupled with a thoughtful critical discussion underpinned by sound, sophisticated research, an elegant, lucid style in which explications are ordered and easy to follow, and forty fascinating illustrations, all subject to insightful commentary, Sherlock’s love of the subject makes the book a joy to read.’ Clio ’... Sherlock provides a well-argued and thoroughly researched account of some of the effects of religious and cultural change on portrayals of the dead.’ Huntington Library Quarterly ’... what we have here is essentially a broad discourse on funerary monuments, remarkably wide-ranging, rich in detailed information, and engagingly presented. ... It is a book to be recommended to anyone wishing to know why monuments contribute so much to our understanding of early modern England.’ Literature & History ’... an extremely valuable new addition to the work on early modern monuments in England, one which convincingly rediscovers their spiritual dimension.’ Ecclesiastical History ’Sherlock’s book is a wide-ranging study, encompassing broad conceptualization and a long time-frame. It is meticulously researched and attractively presented with a set of photographs of funeral mon