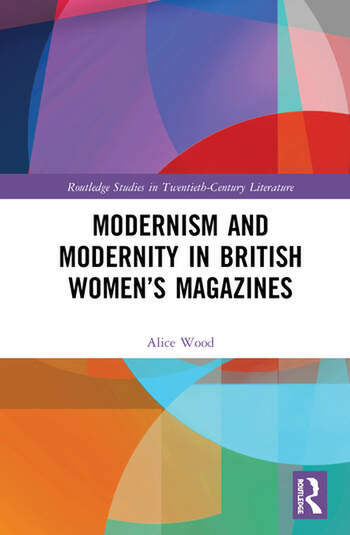 This book explores responses to the strangeness and pleasures of modernism and modernity in four commercial British women’s magazines of the interwar period. Through extensive study of interwar Vogue (UK), Eve, Good Housekeeping (UK) and Harper’s Bazaar (UK), Wood uncovers how modernism was received and disseminated by these fashion and domestic periodicals, and recovers experimental journalism and fiction within them by an array of canonical and marginalized writers, including Storm Jameson, Rose Macaulay, Gertrude Stein, and Virginia Woolf. The book’s analysis is attentive to text and image and to interactions between editorial, feature, and advertising material. Its detailed survey of these largely neglected magazines reveals how they situated radical aesthetics in relation to modernity’s broader new challenges, diversions, and opportunities for women, and how they approached high modernist art and literature through discourses of fashion and celebrity. Modernism and Modernity in British Women’s Magazines extends recent research into the diverse markets and publication outlets through which modernism circulated and adds to the substantial body of scholarship concerned with the relationship between modernism and popular culture. It demonstrates that commercial women’s magazines subversively disrupted and sustained contemporary hierarchies of high and low culture as well as actively participating in the construction of modernism’s public profile.