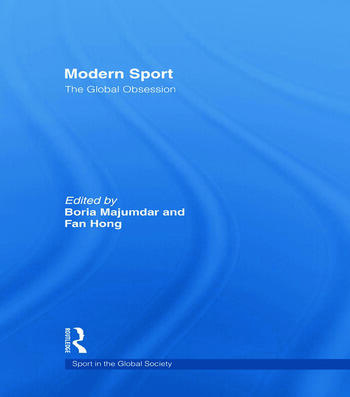 Sport has become more than a simple physical expression or game – it now pervades all societies at all levels and has become bound up in nationalism, entertainment, patriotism and culture. Now a global obsession, sport has infiltrated into all areas of modern life and despite noble ideals that sport stands above politics, religion, class, gender and ideology, the reality is often very different.

These essays by leading academics and rising new talent consider the phenomenon of modern sport and its massive influence over global society. Together, this collection is also a tribute to the pioneering and inspirational work of Professor J.A. Mangan on the political, religious, class and gender-based aspects of modern sport, from academics greatly influenced by him and his writing.

This book was previously published as a special issue of The International Journal of the History of Sport.

Boria Majumdar, a Rhodes scholar, is based at the University of Central Lancashire, UK. He is Executive Editor of the Routledge journals Sport in Society and Soccer and Society and co-editor of the Routledge Series, Sport in the Global Society. A well-known media figure on television, he has also written extensively for the Times of India, Outlook, Wisden and Anandabazar Patrika.

Fan Hong is a professor and the Director of the Irish Institute of Chinese Studies at University College Cork. She is a regional editor of the International Journal of the History of Sport and a member of various editorial boards including the Sports Studies Journal and the International Encyclopedia of Women and Sport.