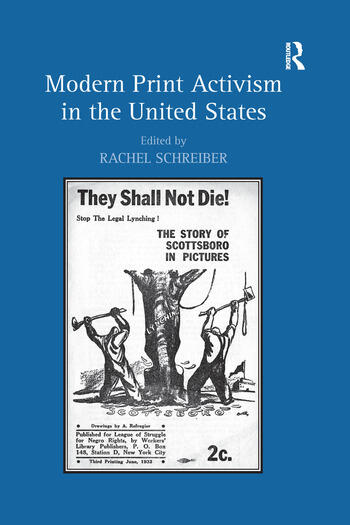 The explosion of print culture that occurred in the United States at the turn of the twentieth century activated the widespread use of print media to promote social and political activism. Exploring this phenomenon, the essays in Modern Print Activism in the United States focus on specific groups, individuals, and causes that relied on print as a vehicle for activism. They also take up the variety of print forms in which calls for activism have appeared, including fiction, editorials, letters to the editor, graphic satire, and non-periodical media such as pamphlets and calendars. As the contributors show, activists have used print media in a range of ways, not only in expected applications such as calls for boycotts and protests, but also for less expected aims such as the creation of networks among readers and to the legitimization of their causes. At a time when the golden age of print appears to be ending, Modern Print Activism in the United States argues that print activism should be studied as a specifically modernist phenomenon and poses questions related to the efficacy of print as a vehicle for social and political change.

'In an era increasingly dominated by digital social media and their remarkable potential for today’s political activists, this thought-provoking collection illuminates the crucial role mass print culture played in the birth of modern activism. Rachel Schreiber has called upon a strong set of scholars across several disciplines to map a vast terrain of print-based activism, ranging from the activities of the KKK and the Communist Party to the homophile movement of the 1950s. Essential reading for scholars of print culture, modernism, post-WWII political and social history, media studies, and visual culture, and, indeed, for anyone interested in this turbulent period of American history.’ Mark S. Morrisson, Penn State University and co-editor of the Journal of Modern Periodical Studies ’...this book succeeds both in the organizing vision of the editor and in the rigorous work of the contributors, whose efforts are manifest in the close and careful analysis of each chapter’s wealth of primary sources...Schreiber’s Modern Print Activism in the United States should be viewed, then, as an exciting foray into print culture studies that offers a compelling argument for the importance of twentieth-century print activism by allowing the detailed analyses of the work’s contributors to convey that sense of importance in their research.’ Publishing History