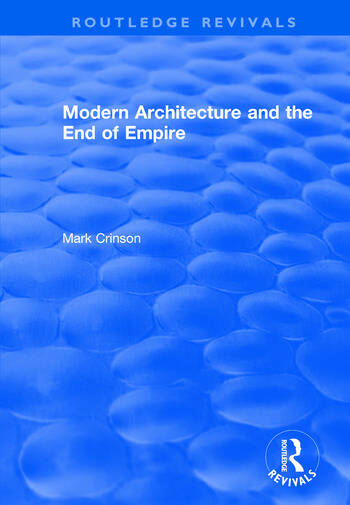 Modern Architecture and the End of Empire

This title was first published in 2003:  Modernist architecture claimed to be the 'international style' but the relationship between modernism and the new dispositions of nations and nationalities which have succeeded the old European empires remains obscure. In this, the first book to examine the interactions between modern architecture, imperialism and post-imperialism, Mark Crinson looks at the architecture of the last years of the British Empire, and during its prolonged dissolution and aftermath. Taking a number of case studies from Britain, Ghana, Hong Kong, Iran, India and Malaysia, he investigates the ambitions of the people who commissioned the buildings, the training and role of architects, and the interaction of the architecture and its changing social and cultural contexts. This book raises questions about the nature of modernism and its roles that look far beyond empire and towards the post-imperial.

Mark Crinson is Senior Lecturer and Head of the School of Art History and Archaeology at the University of Manchester. He is author of Empire Building: Orientalism and Victorian Architecture (Routledge, 1996) and co-author (with Jules Lubbock) of Architecture - Art or Profession? Three Hundred Years of Architectural Training in Britain (Manchester University Press, 1994).

Prize: winner of the 2006 Spiro Kostof Award awarded by the Society of Architectural Historians 'Crinson's valuable reappraisal of modern architecture reminds us that modernity and modernism are haunted by ideas of empire. His scholarship on the lingering remains of empire critically adjusts the way we think about the international style, British architecture and architectures of decolonization.' Jane M. Jacobs, University of Edinburgh 'Unique in its international perspective, Modern Architecture and the End of Empire analyzes the architecture of Modernism in unconventional sites in the waning years of British imperialism.' Nezar AlSayyad, University of California at Berkeley '... a scholarly exploration of the role of modern architecture and architectural culture in relation to imperial decline, the emergence of independent nation-states and neo-colonialism.' Kelly Shanon, Archis '... this innovative and challenging book... an interesting, provocative and well-researched book.' International Journal of Urban and Regional Research

Modern Architecture and the End of Empire