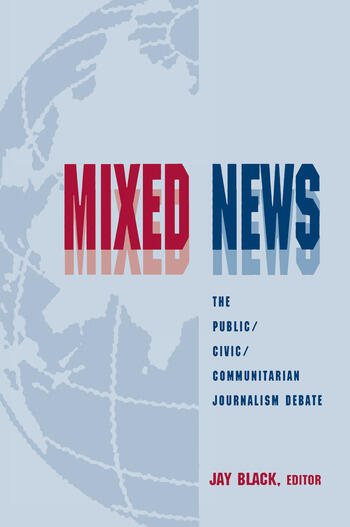 This volume addresses some of the central issues of journalism today -- the nature and needs of the individual versus the nature and needs of the broader society; theories of communitarianism versus Enlightenment liberalism; independence versus interdependence (vs. co-dependency); negative versus positive freedoms; Constitutional mandates versus marketplace mandates; universal ethical issues versus situational and/or professional values; traditional values versus information age values; ethics of management versus ethics of worker bees; commitment and compassion versus detachment and professional "distance;" conflicts of interest versus conflicted disinterest; and "talking to" versus "talking with." All of these issues are discussed within the framework of the frenetic field of daily journalism--a field that operates at a pace and under a set of professional standards that all but preclude careful, systematic examinations of its own rituals and practices. The explorations presented here not only advance the enterprise, but also help student and professional observers to work through some of the most perplexing dilemmas to have faced the news media and public in recent times.

This lively volume showcases the differing opinions of journalistic experts on this significant contemporary issue in public life. Unlike previous books and monographs which have tended toward unbridled enthusiasm about public journalism, and trade press articles which have tended toward pessimism, this book offers strong voices on several sides of this complex debate.

To help inform the debate, a series of "voices"--journalistic interviews with practitioners and critics of public journalism -- is interspersed throughout the text. At the end of each essay, a series of quotes from a wide variety of sources -- "In other words..." -- augments each chapter with ideas and insights that support and contradict the points used by each chapter author.

"...provides a representative picture of the current state of the debate: impassioned, urgent -- and a long way from being resolved."
—Journal of Mass Media Ethics