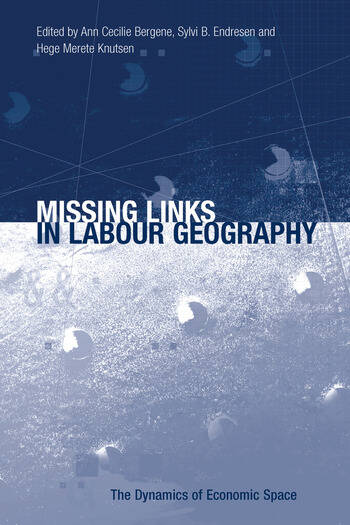 Addressing a number of 'missing links' in the analysis of labour and its geographies, this volume examines how theoretical perspectives on both labour in general and the organizations of the labour movement in particular can be refined and redefined. Issues of agency, power and collective mobilizations are examined and illustrated via a wide range of case studies from the 'global north' and 'global south' in order to develop a better and fuller appreciation of labour market processes in developed and developing countries.

'An energetic and creative intellectual project, labour geography has repeatedly broken new ground. This lively collection features many of the project’s new voices, pushing the boundaries again, and critically revisiting basic questions of agency, power and politics in sites from North to South.' Jamie Peck, University of British Columbia, Canada 'The economy is global, and any understanding of labour and trade unionism today must be transnational: this was obvious even before 2008-9 and the crisis of world capitalism. But labour is not only a victim of neoliberal globalisation: organised workers have the capacity to fight back. This important new work represents a significant advance in the theory of global labour; perhaps more importantly, it offers essential insights for union representatives and activists worldwide.' Richard Hyman, London School of Economics, UK ’This is a specialist academic text. It will be useful to graduate students and labour studies scholars whose research touches on the geographical dimensions of current debates in the field, including the scale of union organizing and the spatial dilemmas of transnational campaigns and international solidarity.’ Labor Studies Journal '... the book is undoubtedly a positive addition to the field of labour geography. The geographically diverse range of case studies which include: Canada, China, England, Namibia, Nigeria, the Philippines and Vietnam, add an invaluable integrity to the theoretical discussions. The book is accessible to anyone with a basic knowledge of labour geography, and for those who are less familiar, the first two chapters provide an effective introduction.' European Spatial Research and Policy