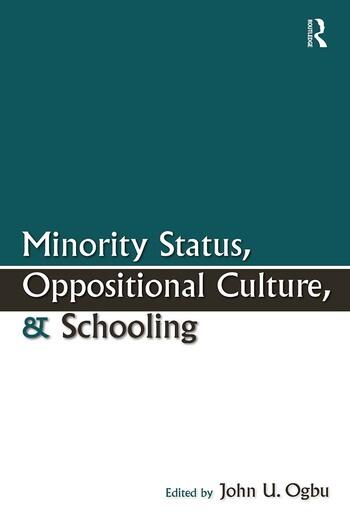 This book is the definitive and final presentation of John Ogbu’s cultural ecological model and the many debates that his work has sparked during the past decade. The theory and empirical foundation of Ogbu’s scholarship, which some have mistakenly reduced to the "acting white hypothesis," is fully presented and re-visited in this posthumous collection of his new writings plus the works of over 20 scholars. Ogbu’s own chapters present how his ideas about minority education and culture developed. Readers will find in these chapters the theoretical roots of his cultural ecological model. The book is organized as a dialogue between John Ogbu and the scholarly community, including his most ardent critics; Ogbu’s own work can be read at the same time as his critics have their say.

Minority Status, Oppositional Culture, and Schooling examines content, methodological, and policy issues framing the debate on academic achievement, school engagement, and oppositional culture. It brings together in one volume, for the first time, some of the most critical works on these issues as well as examples of programs aimed at re-engagement. In addition to African Americans, it also looks at school engagement among Native American and Latino students. This book is essential reading for anyone interested in the study of the academic achievement gap.

PART ONE: HISTORY AND FRAMEWORK

Chapter 1: The History and Status of a Theoretical Debate

Chapter 2: Collective Identity and the Burden of "Acting White" in Black History,

Chapter 3: Ways of Knowing: The Ethnographic Approach to the Study of Collective

Chapter 5: Language and Collective Identity Among Adults and Students in a Black

Chapter 6: "Signithia, You Can Do Better Than That": John Ogbu (and Me)

and the Nine Lives Peoples

Chapter 9: Reexamining Resistance as Oppositional Behavior: The Nation of Islam and the

Creation of a Black Achievement Ideology

John U. Ogbu, an Anthropologist, was Chancellor and Alumni Distinguished Professor of Anthropology, University of California, Berkeley, and a Member of the National Academy of Education. A well-known author and researcher in the field of minority education, he wrote numerous books and articles on the subject, including the award-winning The Next Generation: An Ethnography of Education in an Urban Neighborhood; Minority Education and Caste: The American System in Cross-Cultural Perspective; and Black American Students in an Affluent Society: A Study of Academic Disengagement (winner of a 2004 American Educational Studies Association Critics’ Choice Award). Professor Ogbu died in 2003 before this book was completed.