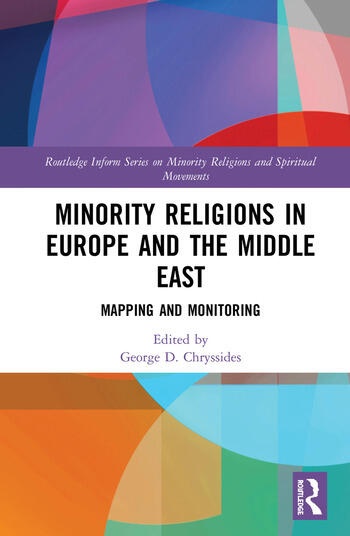 Minority Religions in Europe and the Middle East: Mapping and Monitoring

Minority religions, not only New Religious Movements, are explored in this innovative book including the predicament of ancient religions such as Zoroastrianism, ‘old new’ religions such as Baha’i, and traditional religions that are minorities elsewhere. The book is divided into two parts: the gathering of data on religious minorities ("mapping"), and the ways in which governments and interest groups respond to them ("monitoring"). The international group examine which new religions exist in particular countries, what their uptake is, and how allegiance can be ascertained. They explore a range of issues faced by minority religions, encompassing official state recognition and registration, unequal treatment in comparison with a dominant religion, how changes in government can affect how they fare, the extent to which members are free to practise their faith, how they sometimes seek to influence politics, and how they can be affected by harassment and persecution.

Bringing together debates concerning the social and political issues facing new religions in Europe and the Middle East, this collection extends its focus to Middle Eastern minority faiths, enabling exposition of spiritual movements such as the Gülen Movement, Paganism in Israel, and the Zoroastrians in Tehran.

2 What do the censuses tell about minority religions? Some reflections on Estonia

4 Minority Religions in Contemporary Lithuania: On the Margins of the Field of Religion?

5 Spiritual movements in times of crisis: An anthropological account of alternative spirituality in Portugal and Greece

6 Sacred Homeland, Glorious Ancestors and Old-time Language: Ethnic Elements in the Identity of the Zoroastrian Religious Minority in Modern Tehran

7 Jehovah's Witnesses and the Middle East

9 Religious minorities in democratic Spain: rekindling the past and considering the future

10 What do we talk about when we talk about legitimate religion? Failure and success in the registration of two Pagan communities in Finland

11 Religious Liberty in the Russian Federation after 1997

12 The Church of Scientology in Hungary: A ‘Religious Multinationals’ Case Study

13 Two Steps Forward, One Step Back: The Shaping of a Community-Building Discourse among Israeli Pagans, 1998-2012

15 Religion, social change and responding to persecution – the case of the Bahá’í community in Iran

16 The Bektashi-Alevi Spectrum from the Balkans to Iran: Sufi Minorities and Politics

17 Key Data on Religions by Country

George D. Chryssides studied at the universities of Glasgow and Oxford, and has taught at various British universities. He was Head of Religious Studies at the University of Wolverhampton, UK, from 2001 to 2008, and is now Honorary Research Fellow in Contemporary Religion at the University of Birmingham and York St John University. He has published extensively, principally on new religious movements, and is a Series Editor for the Routledge New Religions series. His books include Historical Dictionary of Jehovah’s Witnesses (2008), Heaven’s Gate: Postmodernity and Popular Culture in a Suicide Group (2011), Christians in the Twenty-First Century (with Margaret Z. Wilkins 2011), Historical Dictionary of New Religious Movements (2012), The Bloomsbury Companion to New Religious Movements (co-edited with Benjamin E. Zeller,2014), and Jehovah’s Witnesses: Continuity and Change (2016). He was made an Honorary Member of the British Association for the Study of Religions in 2009, and is a Governor and Co-Vice-Chair of Inform.

Minority Religions in Europe and the Middle East: Mapping and Monitoring