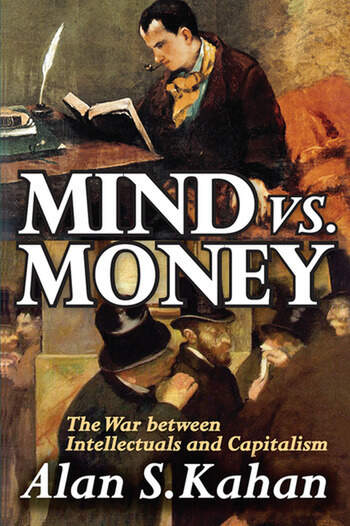 Mind vs. Money: The War Between Intellectuals and Capitalism

For the past 150 years, Western intellectuals have trumpeted contempt for capitalism and capitalists. They have written novels, plays, and manifestos to demonstrate the evils of the economic system in which they live. Dislike and contempt for the bourgeoisie, the middle classes, industry, and commerce have been a prominent trait of leading Western writers and artists. Mind vs. Money is an analytical history of how and why so many intellectuals have opposed capitalism. It is also an argument for how this opposition can be tempered.

Historically, intellectuals have expressed their rejection of capitalism through many different movements, including nationalism, anti-Semitism, socialism, fascism, communism, and the 1960s counterculture. Hostility to capitalism takes new forms today. The anti-globalization, Green, communitarian, and New Age movements are all examples. Intellectuals give such movements the legitimacy and leadership they would otherwise lack. What unites radical intellectuals of the nineteenth century, communists and fascists of the twentieth, and anti-globalization protestors of the twenty-first, along with many other intellectuals not associated with these movements, is their rejection of capitalism. Kahan argues that intellectuals are a permanently alienated elite in capitalist societies.

In myriad forms, and on many fronts, the battle between Mind and Money continues today. Anti-Americanism is one of them. Americans like to see their country as a beacon of freedom and prosperity. But in the eyes of many European and American intellectuals, when America is identified with capitalism, it is transformed from moral beacon into the "Great Satan." This is just one of the issues Mind vs. Money explores. The conflict between Mind and Money is the great, unresolved conflict of modern society. To end it, we must first understand it.

Acknowledgments
Part I: Mind vs. Money
1. The Ivory Tower at War
Mind vs. Money
Who Are the "Intellectuals"?
An Accidental Aristocracy
The First Thing We Do, Let's Get
Rid of All the Intellectuals?
An Insoluble Problem?
2. The Three Don'ts
A Very Brief History of Western Intellectuals
The Three Don'ts
The First Don't The Classical Background
The Second Don't The Christian Background
The Third Don't The Democratic Background
3. The Unexpected Honeymoon of Mind and Money, 1730-1830
The Point of Departure
Justifications of Commerce
Why the Honeymoon Began
Why the Honeymoon Ended
Part II: Intellectuals and their Discontents: The Nineteenth Century (1850-1914)
4. How Capitalism Lost the Struggle Over Character
A Fairy Tale
The Self-Made Man
The Hypocrite
Family Values
The Aristocratic Critique of Stupidity
Bohemian vs. Bourgeois: Criticizing a Lifestyle
The Question of Technology
Our Mutual Incomprehension
5. Academic Alternatives to Capitalism 133
The Babel Project: Building Alternatives to Capitalism
In the Beginning There Was Marx
The Moral Community: Toennies
The Protestant Critique of Capitalism: Veblen
Sweetness and Light, Sturm und Drang:
Arnold and Nietzsche
With a Friend Like This, Who Needs Enemies? Tocqueville
Part III: Triumphs and Tragedies of the Anti-Capitalist Spirit: The Twentieth Century (1914-2001)
6. War
Why Great Revolutions Did Not Become Rare
Continuity and Change after World War I
Communism: The Red and the Pink
Fascism
Social Catholicism
The New Deal
Why Smart People Persist with Dumb Mistakes
7. Retreat
The Culture Wars
The Myth of Alienation
Aristocratic Reactions: Heidegger,
the Frankfurt School, and Foucault
Make Love, Not Money: The Counterculture
The Neoconservatives A Contradiction within
the Intellectual Class?
8. Recent Battles
Anti-Americanism as an Anti-Capitalist Movement
The French Case
The Anti-Globalization Movement
Green vs. Gold
A Digression: Feminism and Capitalism
9. On Intellectuals in Democratic Society
The Hundred Fifty Years War
The Chapter Tocqueville Never Wrote
Capitalism's Moral Culture
Reforming the Intelligentsia
The Games People Play
The Intellectual Limits of Capitalism
General Education
Detente
Index

Mind vs. Money: The War Between Intellectuals and Capitalism