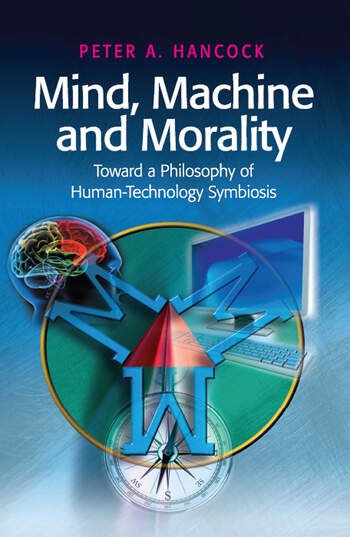 Mind, Machine and Morality: Toward a Philosophy of Human-Technology Symbiosis

Technology is our conduit of power. In our modern world, technology is the gatekeeper deciding who shall have and who shall have not. Either technology works for you or you work for technology. It shapes the human race just as much as we shape it. But where is this symbiosis going? Who provides the directions, the intentions, the goals of this human-machine partnership? Such decisions do not derive from the creators of technology who are enmeshed in their individual innovations. They neither come from our social leaders who possess only sufficient technical understanding to react to innovations, not to anticipate or direct their progress. Neither is there evidence of some omnipotent 'invisible hand,' the simple fact is that no one is directing this enterprise. In Mind, Machine and Morality, Peter Hancock asks questions about this insensate progress and has the temerity to suggest some cognate answers. He argues for the unbreakable symbiosis of purpose and process, and examines the dangerous possibilities that emerge when science and purpose meet. Historically, this work is a modern-day child of Bacon's hope for the 'Great Instauration.' However, unlike its forebear, the focus here is on human-machine systems. The emphasis centers on the conception that the active, extensive face of modern philosophy is technology. Whatever we are to become is bound up not only in our biology but critically in our technology also. And to achieve rational progress we need to articulate manifest purpose. This book is one step along the purposive road. Drawing together his many seminal writings on human-machine interaction and adapting these works specifically for this collection, Peter Hancock provides real food for thought, delighting readers with his unique philosophical perspective and outstanding insights. This is theoretical work of the highest order and will open minds accordingly.

Contents: Preface; The science and philosophy of human-machine systems; Teleology for technology; Convergent technological evolution; The future of function allocation; The sheepdog and the Japanese garden; On the future of work; Men without machines; Life, liberty, and the design of happiness; Mind, machine and morality; References; Index.

Peter A. Hancock is Provost Distinguished Research Professor in the Department of Psychology, the Institute for Simulation and Training, and the Department of Civil and Environmental Engineering at the University of Central Florida. Previously, he was the founder and Director of the Human Factors Research Laboratory at the University of Minnesota where he held appointments in the Departments of Computer Science and Electrical Engineering, Mechanical Engineering, Psychology, and Kinesiology as well as at the Cognitive Science Center and the Center on Aging Research. He currently holds as an Adjunct Senior Research Scientist at the Transportation Institute of the University of Michigan. His work has garnered over $15 million dollars in externally funded research awards and he is the author of more than 600 refereed scientific articles and publications as well as writing and editing a number of books. He has received various awards for his work, among them the Franklin V. Taylor Award of the American Psychological Association, the Liberty Mutual Medal from the International Ergonomics Association, the Jack Kraft Award of the Human Factors and Ergonomics Society and the Sir Frederic Bartlett Medal of the Ergonomics Society of Great Britain for lifetime achievement. In 2006 he was named the Norbert Wiener Award winner of the IEEE Systems, Man, and Cybernetics Society, its highest technical award. Peter is a Fellow, and past President, of the Human Factors and Ergonomics Society.

'Professor Peter Hancock is the modern day Renaissance man, crossing discipline boundaries with ease. Mind, Machines and Morality treats us to a metaphysical account of the issues that touch our everyday lives. Peter tells a good story, often rooted in his personal experience, which draw the reader's attention to the crux of the big human-technology issues. This book will challenge your conceptions of the discipline of Human Factors; it will whet your appetite and leave you thirsting for more.' Neville Stanton, Brunel University, UK 'A delightful and penetrating philosophy of purpose and process in human-machine-society interactions, as only Peter Hancock can render it - liberally spiced with history, humor and erudition.' Tom Sheridan, Massachusetts Institute of Technology , USA 'Mind, Machine and Morality is a masterwork by one of the great scientists and thinkers of our time. Hancock's theory relies on notions of perception-action coupling and goal-orientation of human-machine systems. Thus, were I to reach into history, I would say that Hancock has taken Edward C. Tolman's Purposive Behavior in Animals and Men and James J. Gibson's Ecological Psychology, arguably two of the great works in psychology, and extended them into the computer age, and well beyond. Hancock does far more than present tales of caution about the impact of machines on people: He presents tales of celebration of the human ability to adapt and to exercise its moral faculty. Hancock's intellect, itself charged with a clear sense of right and wrong, races across history, using poetry, lithograph, allegory, metaphor, and tales of modern technological woes. Just the set of poems by great poets about the dangers and woes of mechanization and machines is itself worth the price of admission. Hancock's mind courses across history to bring tales of technology and morality, juxtaposed in crystalline relief. Only a mind as far-reaching and at the same time as scientifically grounded as Hancock's co

Mind, Machine and Morality: Toward a Philosophy of Human-Technology Symbiosis