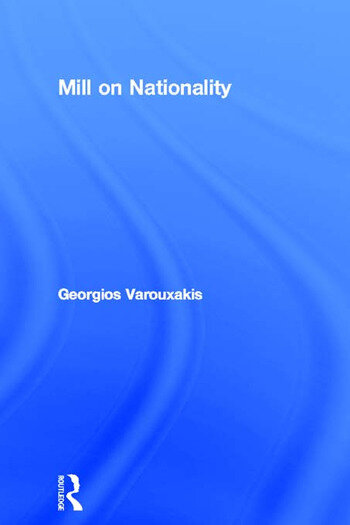 John Stuart Mill's thought has been central in recent (as well as older) works of political theory discussing the relationship between liberal democratic politics and nationality or nationalism -- which is far from surprising, given his undisputed influence on liberal attitudes towards nationality from the 1860s to the present. This book provides the first thorough critical study of the attitude of this pillar of the liberal tradition towards nationality, nationhood, patriotism, cosmopolitanism, intervention/non-intervention, and international politics more generally. Based on exhaustive research in a great range or writings by Mill, as well as by his contemporaries and later students, it establishes for the first time clearly and subtly where exactly Mill stood with regard to nationhood, nationalism, patriotism, cosmopolitanism, national self-determination, intervention/non-intervention and other important issues in international ethics. It thus exposes and challenges all sorts of misconceptions, half-truths, or myths surrounding Mill's views on, and attitude towards, nationality and related issues in a vast literature from the mid-nineteenth to the beginning of the twenty-first century. At the same time, it offers a timely contribution to contemporary debates among political theorists on the relationship between liberal democratic values and nationalism, patriotism and cosmopolitanism, not least through its articulation of a distinct sense in which patriotism and cosmopolitanism can be compatible and mutually reinforcing (based on Varouxakis's interpretation of Mill's thought on this question). The reader will find critical discussions of the pronouncements on some of the issues examined (or on Mill's contributions to them) of some of the most important late-twentieth-century political theorists as well as of contemporaries or near-contemporaries of Mill.

'This is a much appreciated and welcome work because of the centrality of millian position in the liberalism/nationalism dispute...an interseting and promising position, which can have an important role in the contemporary dicussion of international ethics.' - Raffaele Marchetti

'No-one has combed through Mill's collected works with anything like this degree of thoroughness or acuity.' - Peter Mandler, Cambridge University

'Varouxakis works to set the record straight on this major liberal figure's contribution to understanding the phenomenon of nationalism. His perspicacious use of a wide array of Mill's work is one of the great strengths of this book that promises to be a valuable resource for researchers...Varouxakis succeeds admirably in enriching our understanding of Mill's complex views on this cluster of questions.' - The Review of Politics, Vol. 65, No. 2 (Spring 2003), pp. 290-292

'Georgios Varouxakis is a leader in the new generation of Mill scholars, and his work is exciting and provocative...Mill on Nationality marks an important statement of Varouxakis's extensive research on Mill...The book delivers.' - Bart Schultz, University of Chicago, Journal of the History of Philosophy

'Mill on Nationality is a timely and valuable addition to the literature both on Mill and on nationality. Scholars with an interest in either subject will read it with great profit.' - Dale Miller, Old Dominion University, Utilitas

'In Mill on Nationality, Varouxakis' main quality is the ability to frame, and thus explain, Mill's position within the big picture of his time. This is a much appreciated and welcome work because of the centrality of [the] millian position in the liberalism/nationalism disputeThis twofold understanding of the utilitarian principle, able to combine a patriotisme éclairé with a cosmopolitan appeal, is definitely an interesting and promising position, which can have an important role in the contemporary discussion of international ethics.' - Raffaele Marchetti (LSE), Millennium: Review of International Studies

'...maybe the most interesting part of Varouxakis' book is precisely his general effort to help prevent the abuse of classical texts in contemporary debates.' - Victor Rizescu, Central European University, Budapest and University of Central European Bucharest, European Review of History