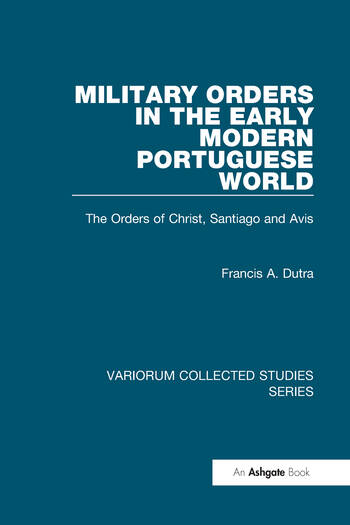 Military Orders in the Early Modern Portuguese World: The Orders of Christ, Santiago and Avis

During the sixteenth, seventeenth, and eighteenth centuries, the three Portuguese military orders of Christ, Santiago and Avis became that kingdom's most important institutions for rewarding services to the Crown. Membership in these military orders was highly prized as status symbols and because of the orders' "purity of blood" statutes, these knighthoods were more highly esteemed than mere patents of nobility, especially since such knighthoods automatically ennobled. Francis A. Dutra has written widely on the Portuguese military orders of Christ, Santiago and Avis - a topic generally neglected by students of early modern Portugal. This volume brings together a selection of his pioneering essays. Based extensively on archival research, they reflect his special interest in social mobility and use of the knighthoods for patronage, while particular sections focus on the role of the orders in the Portuguese maritime expansion and in India and Brazil, and on the medical profession. The collection includes English translations of four studies that originally appeared in Portuguese, as well as a detailed index, in itself a useful research tool.

Francis A. Dutra is Associate Professor of History at the University of California, Santa Barbara, USA.

’... it will certainly stand the test of time as an authoritative examination of the membership of its three military orders.’ Sixteenth Century Journal ’The long waited collection of studies on the Portuguese military orders by the doyen in the field is the result of archival research conducted systematically during almost forty years.’ Bulletin of Hispanic Studies

Military Orders in the Early Modern Portuguese World: The Orders of Christ, Santiago and Avis