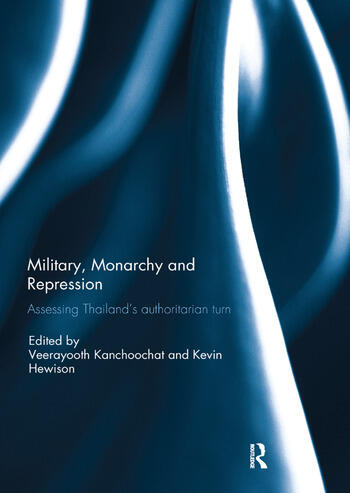 Thailand’s politics has been contentious in recent years. With a military coup in 2006 and another in 2014, the country has moved from being a promising electoral democracy to a military dictatorship. Electoral politics was embraced enthusiastically by some groups, including those in rural areas of the north and northeast, but came to be feared by groups variously identified as the old elite, royalists and the establishment. The transition to authoritarianism saw large and lengthy street protests and considerable violence. This book examines the background to and the sources of conflict and the turn to authoritarianism. It addresses: the return of the military to political centre stage; the monarchy’s pivotal role in opposing electoral democracy; the manner in which sections of civil society have rejected electoral politics; and the rise of powerful non-elected bodies such as the Constitutional Court. In examining Thailand’s authoritarianism, attention is also given to how income and wealth inequality may motivate political outcomes and also to the ways in which the military and the old elite have attempted to establish a "Thai-style democracy" that disenfranchises the majority. This book was previously published as a special issue of Journal of Contemporary Asia.

1. The 2014 Thai Coup and Some Roots of Authoritarianism
Chris Baker

Kevin Hewison is Emeritus Professor in Asian Studies at the University of North Carolina at Chapel Hill and a Visiting Professor at the Institute of China Studies, University of Malaya. He is the author of more than 200 publications of politics, development and labour issues in Thailand and on Southeast Asia.

is Assistant Professor of Political Economy at the National Graduate Institute for Policy Studies (GRIPS, Tokyo). He holds an MPhil and PhD from the University of Cambridge. His main research interests are in comparative economic and political development, with a focus on Thailand and newly industrialising economies in East and Southeast Asia.