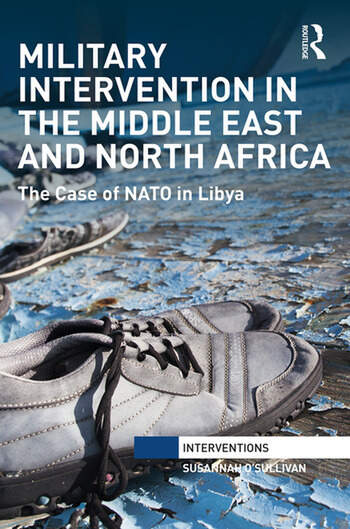 Military Intervention in the Middle East and North Africa: The Case of NATO in Libya

This book contributes to an increasingly important branch of critical security studies that combines insights from critical geopolitics and postcolonial critique by making an argument about the geographies of violence and their differential impact in contemporary security practices, including but not limited to military intervention. The book explores military intervention in Libya through the categories of space and time, to provide a robust ethico-political critique of the intervention.

Much of the mainstream international relations scholarship on humanitarian intervention frames the ethical, moral and legal debate over intervention in terms of a binary, between human rights and state sovereignty. In response, O’Sullivan questions the ways in which military violence was produced as a rational and reasonable response to the crisis in Libya, outlining and destabilising this false binary between the human and the state. The book offers methodological tools for questioning the violent institutions at the heart of humanitarian intervention and asking how intervention has been produced as a rational response to crisis.

From Humanitarian Intervention to R2P

The critique of intervention and R2P: a view from where?

The need for speed in military intervention

Humanitarianism from a great height: grey battle lines in the virtuous war

Colonial entanglements and the making of the Libyan state

A two-dimensional ‘Gaddafi’s Libya’ and multidimensional geographies of violence

Coming in from the cold: Arms, torture and migration in the deal with Gaddafi

Imaginative geographies of the Libya conflict

Voices of the uprising, rebuilding the state

Conclusion: When a war is not a war, and resisting humanitarian intervention

Military Intervention in the Middle East and North Africa: The Case of NATO in Libya