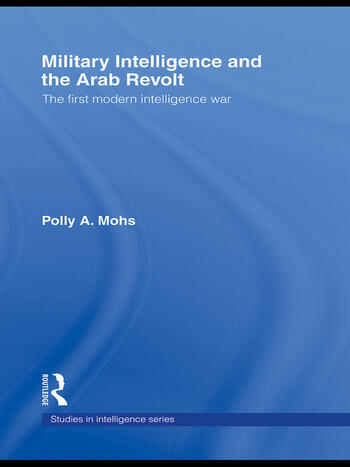 Military Intelligence and the Arab Revolt examines the use and exploitation of intelligence in formulating Britain’s strategy for the Arab Revolt during the First World War. It also presents a radical re-examination of the achievements of T.E. Lawrence (Lawrence of Arabia) as an intelligence officer and guerrilla leader.

Modern intelligence techniques such as Sigint, Imint and Humint were incorporated into strategic planning with greater expertise and consistency in Arabia than in any other theatre during the war, and their deployment as tactical support for the Arab forces was decisive. Using much previously unpublished material, this study shows conclusively how Britain’s intelligence community in Arabia influenced the conduct of the Arab campaign, promoted a full-scale guerrilla war and thereby facilitated the Arab armies’ march north into Syria, Palestine and the modern Middle East. Polly A. Mohs contributes to the unveiling of another hidden corner of the history of the Middle East and to a better understanding of the significance of intelligence in formulating strategic processes in the modern era.

Military Intelligence and the Arab Revolt will be of much interest to students of intelligence studies, military history, Middle East history, British imperial history, guerrilla warfare and insurgency.

Introduction.  Legacies of the First World War.  Intelligence: Suspended Potential.  Progress to the East. The Arab Bureau and British Policy  1. Setting the Scene: British Intelligence and an Arab Insurrection, 1913–15  1.1 British Egypt: Redefining Strategic Security  1.2 Schemes for Subversion: Arab Opportunities and British Ambivalence  1.3 Political Negotiations  1.4 The Foreign Office and the Sykes-Picot Agreement  1.5 The Creation of the Arab Bureau  2. The Outbreak of the Arab Revolt, May–November 1916  2.1 The Sherif of Mecca Launches Uprising  2.2 Complications for British Support  2.3 Debating Control of the Hejaz Campaign  2.4 The Hejaz Uprising: A Precedent for Syria?  3. Arriving at a Doctrine of Guerrilla Warfare, June–October 1916  3.1 The Arab Bureau and Evaluations of the Arab Forces  3.2 Divided Islam and a Military Stalemate  3.3 Crisis at Rabegh: Debate Over an Immobile Brigade  3.4 A ‘Corner Turned’ for the Arab Revolt, and McMahon  3.5 Lawrence’s Mission: Advancing a Strategy of Guerrilla Warfare  4. Intelligence on Trial: The Rabegh Crisis, November 1916–January 1917  4.1 First Alarm at Rabegh: Intelligence Wanted  4.2 The Military Debate Over Reinforcements  4.3 Intelligence and the Strategic Detachment from Medina  4.4 The Shield of Rabegh Collapses: The Turkish Counter-Attack, December 1916  4.5 Intelligence and the Gainsaying of Wingate  5. Reorientation: The Arab Revolt Shifts North, January–April 1917  5.1 Wejh: Filling the Strategy Vacuum  5.2 Regular Support for an Irregular Campaign  5.3 Imint and Turkish Redeployment to the Railway  5.4 Tribal Politics and a Northern Migration  5.5 Sigint and a Vanished Option  6. An Unauthorized Policy Triumph: Intelligence and Aqaba, February–July 1917  6.1 Destination: Medina, Jauf or Aqaba?  6.2 Lawrence’s Epiphany on Medina  6.3 Another ‘Revolt’: The Sykes-Picot Stratagem Stumbles  6.4 Intelligence Assessments: Medina Fades to Syria  6.5 The Best Laid Plans: Political and Military Intelligence on Aqaba  6.6 Aftermath: Intelligence Revelations.  Conclusion.  Theatre Challenges.  Regional Expertise: The Arab Bureau.  Lessons: The Lawrence Conundrum

Polly A. Mohs is an historian and holds a Phd from the University of Cambridge.