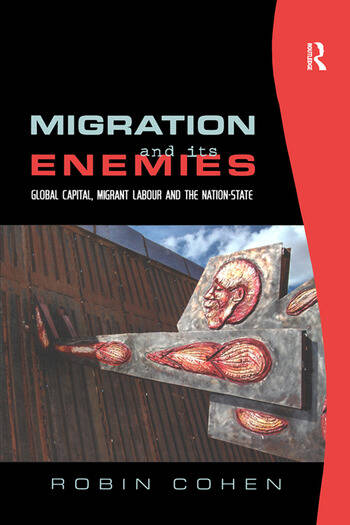 Migration and its Enemies: Global Capital, Migrant Labour and the Nation-State

Can politicians effectively control national borders even if they wish to do so? How do politically powerless migrants relate to more privileged migrants and to national citizens? Is it possible for capital to move to labour rather than vice versa? In this book Robin Cohen shows how the preferences, interests and actions of the three major social actors in international migration policy - global capital, migrant labour and national politicians - intersect and often contradict each other. Cohen addresses these vital questions in a wide-ranging, lucid and accessible account of the historical origins and contemporary dynamics of global migration.

Robin Cohen is ESRC Professional Research Fellow and Professor of Sociology at the University of Warwick, UK. He served as Dean of Humanities at the University of Cape Town while on long leave from Warwick in 2001-3, and directed the nationally designated UK Centre for Research in Ethnic Relations from 1985-9. He has held full-time appointments at the Universities of Birmingham, Ibadan and the West Indies, and seasonal appointments at Stanford University, University of Toronto and University of California at Berkeley. His many books include The New Helots: Migrants in the International Division of Labour (Ashgate, 1987). He is the editor of the UCL Press/Routledge/Washington University Press series on Global Diasporas and of the Cambridge Survey of World Migration (1995). His work has been translated into Danish, French, German, Greek, Italian, Japanese, Mandarin, Portuguese and Spanish.

’This work by a leading scholar of international migration provides new insights into emerging trends as diverse (and yet interconnected) as the post 9/11 security panic, the cosmopolitanism of mobile elites, and the struggles of super-exploited undocumented migrant labourers.’ Stephen Castles, Refugee Studies Centre, University of Oxford, UK ’Robin Cohen has written a masterful overview of the historical origins and dynamics of global migration and offers insightful interpretations of its contemporary and future social implications. No other study combines as broad an understanding of the political and economic forces shaping migration flows with such acute analyses of their local consequences in both sending and receiving nations across the globe. Both profound and accessible, the book teaches us how migration challenges and expands accepted notions of humanity and contributes to our potential for global citizenship.’ Josh DeWind, Director, International Migration Programme, Social Science Research Council, USA ’Migration and its Enemies delivers all we have come to expect over the years from Robin Cohen. Wide-ranging and engagingly written, it confronts an astonishing range of theories - from liberalism and neo-liberalism to classical Marxism, world systems and post-colonialism - with evidence drawn from more than a century of global migrations. It is hard to imagine the potential reader who could finish this book without having at least one cherished assumption fundamentally challenged.’ Donna R. Gabaccia, Rudolph J. Vecoli Professor, University of Minnesota, USA ’If you are looking for a book that will provide you with a broad-ranging account of migrant flows and experiences, turn to Robin Cohen. His expertise on migration and associate issues is long standing...The book is written with clarity and a deep understanding of its field.’ European Journal of Communication ’The originality of Cohen’s approach is that he engages in critic

Migration and its Enemies: Global Capital, Migrant Labour and the Nation-State