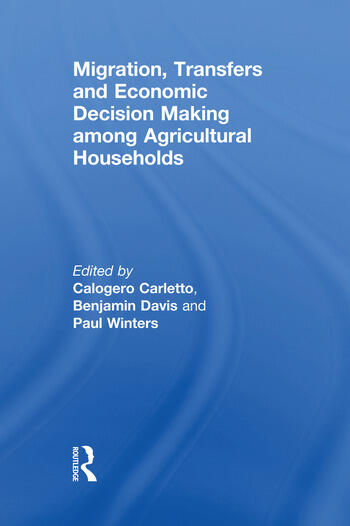 The increasing volume of remittances and public transfers in rural areas of the developing world has raised hopes that these cash inflows may serve as an effective mechanism for reducing poverty in the long term by facilitating investments and raising productivity, particularly in agriculture where market failures are most manifest. This book systematically tests the empirical relationship between cash transfers and productive spending in agriculture amongst rural households in six different countries of the developing world. Together, the studies point to little impact of migration and public and private transfers on agricultural productivity, instead facilitating a transition away from agriculture or to a less labour intensive type of agriculture.

From a policy perspective the studies raise the question of how to maintain rural economies, as migration and social assistance are unlikely to provide a sustainable way to overcome rural poverty in the long run for those that remain in rural areas. For the foreseeable future, agriculture will play an important role in alleviating poverty and sustaining growth in rural areas. Yet, public and private transfers are not providing much of the impetus needed to raise the sector’s productivity. Whether the transfers are invested in agriculture will ultimately depend on the attractiveness of the sector, which is largely determined by the policies of governments and donors.

This book was published as a special issue of the Journal of Development Studies.

Calogero Carletto is a Senior Economist with the Development Research Group at the World Bank. His research interests include poverty, migration and rural development, as well as methodological issues in data collection.

Benjamin Davis is Senior Economist with the Agricultural Development Economics Division of the Food and Agriculture Organization of the United Nations. His research focuses on the interplay between off farm activities, migration, food security and rural development.

Paul Winters is Associate Professor in the Department of Economics at American University, Washington D.C. His research focuses on issues related to rural poverty in developing countries.