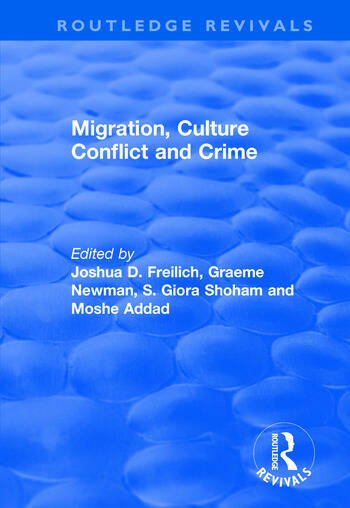 This title was first published in 2002: The issue of immigration and crime in all of its many contexts and forms, is a problem which affects numerous countries throughout the world. In many countries, immigrants have been accused of disproportionate involvement in crime while, in others, immigrants are often claimed to be the victims of criminal offenders, as well as indifferent criminal justice systems. The subjects covered within this informative collection include the offending and victimization rates of immigrants and their dependants, institutional racism, human trafficking/smuggling and ethnic conflicts. In particular, the problems faced by female immigrants are addressed in detail. Whilst some papers look at the issues facing particular countries, such as Germany, the United Kingdom, Australia, Israel and Turkey, others adopt a more comparative approach. Migration, Culture Conflict and Crime is an essential and compelling read for all those with a strong interest in this important area. Not only does it significantly advance our scientific knowledge concerning the relationship between immigration, crime and justice, but it also sets forth a number of proposals which, if implemented, could address many of the problems found in these areas.

’...a rich and diverse collection of essays...this book includes a variety of very well written as well as intriguing analyses and discussions of the migration-crime relationship...and it represents a very welcome addition to the literature on migration and crime...’ International Criminal Justice Review '...the book does provide clearly signposted pathways for those eager to study further this major global issue.' Patterns of Prejudice