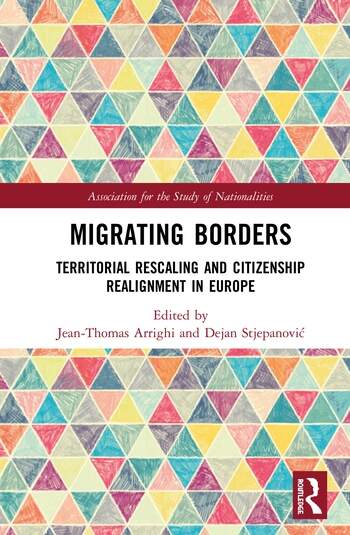 Migrating Borders explores the relationship between territory and citizenship at a time when the very boundaries of the political community come into question.

Made up of an interdisciplinary team of social scientists, the book provides new answers to the age-old ‘question of nationalities’ as it unfolds in a particular context – the European multilevel federation – where polities are linked to each other through a complex web of vertical and horizontal relations. Individual chapters cover and compare well-known cases such as Catalonia, Kosovo and Scotland, but also others that often fall under the radar of mainstream analysis, such as the Turkish Republic of Northern Cyprus or the Roma. At a time of heightened uncertainty surrounding the European integration project, the book offers an invaluable theoretical and empirical compass to navigate some of the most pressing issues in contemporary European politics.

Exploring what happens to citizenship when borders ‘migrate’ over people, Migrating Borders will be of great interest to scholars of Ethnic and Migration Studies, European Politics and Society, Nationalism, European Integration and Citizenship. This book was originally published as a special issue of Ethnopolitics.

1. Introduction: The Rescaling of Territory and Citizenship in Europe

2. A Multilevel Theory of Democratic Secession

3. State Formation under International Supervision and the Construction of Hierarchies in National Membership: A Balkan Story

4. The Right to Vote: Constitutive Referendums and Regional Citizenship

5. ‘The People, Year Zero’: Citizenship and the Politics of Independence in Scotland and Catalonia

6. Contested States as Liminal Spaces of Citizenship: Comparing Kosovo and the Turkish Republic of Northern Cyprus

7. Roma in Times of Territorial Rescaling: An Inquiry into the Margins of European Citizenship

8. The Regional Battleground: Partisanship as a Key Driver of the Subnational Contestation of Citizenship

9. Is a Theory of Self-determination Possible?

Jean-Thomas Arrighi is a Research Fellow at the Swiss Forum of Migration and Population Studies of the University of Neuchâtel, Switzerland.

is a Lecturer in Politics at the University of Dundee, UK.