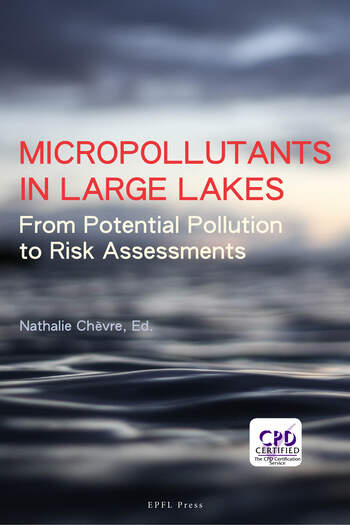 Scientists, regulators, and the general public are now more and more aware of the chemicals present in surface waters worldwide. Agrochemicals, such as herbicides or insecticides, pharmaceuticals and cosmetics can be detected at low to medium concentrations in seas, groundwaters and rivers. Among freshwaters, lakes are of particular concern. These large reservoirs are used as sources of food and drinking water, but also serve for recreational activities.

This book aims in presenting insights into the physical, chemical, and ecological dynamics of large lakes that enable proposing recommendations for sustainable lake management regarding chemicals. Lake Geneva, Switzerland, is used as a case study, but the developed methodologies and tools can be useful for lake water quality management in general.

A first chapter is dedicated to the chemicals entering the lake through agriculture. These are mainly pesticides. After a review of the different types of compounds, the authors present the main pathways these compounds follow to enter the lake. The case of glyphosate, an herbicide largely used worldwide, is presented. A second chapter illustrates the urban source of pollutants with the case of pharmaceuticals and biocides. Two models are presented that allow estimating the load and the dynamic of these chemicals that may exit from an urban catchment and therefore reach a lake. Special attention will be paid to the ‘end of pipe’ removal of these compounds at a WWTP. A third chapter is dedicated to the lake circulation. The aim of this chapter is to present an overall description of the lake’s hydrodynamics, which is driven by three factors: wind, temperature and Coriolis forces. To achieve this aim, a hydrodynamic model is presented that allows describing the behavior of the top layer of the lake based on the wind direction. The importance of stable hydrogen and oxygen isotopes for characterizing the sources of water and the mixing processes in the lake is also described.

The next chapters are dedicated to a Bay, called the Vidy Bay, that receives the treated effluents of the largest wastewater treatment plant of the lake catchment. This latter represents therefore one of the major point sources of contaminants for lake Geneva. These two chapters will focus on the various processes that control the transfer of chemicals (associated to particles or in a dissolved state) discharged into the bay and transported to the lake’s main water body.

Then, a next chapter focuses on one major issue of chemicals in aquatic systems like lakes, i.e. the risk of the mixture of chemicals. The evaluation of the risk of mixture is not trivial and the models that allow doing it are presented in a critical way. Their validity as predictive tools is illustrated with the example of herbicides mixture in Lake Geneva.

A final chapter synthesizes the main findings and discusses some recommendations for the management of large lakes regarding micropollution.

Micropollutants in surface waters: a worldwide recognition of the issue

Agricultural sources of micropollutants: from the catchment to the lake

Agricultural sources of micropollutants of the catchment

Source and transport dynamics of glyphosate: a case study in Swiss vineyards

Urban sources of micropollutants: From the catchment to the lake

Fate of micropollutants in WWTPs

Occurrence, fate and ecotoxicological relevance of micropollutants in Vidy Bay

Modelling the micropollutants plume in the Vidy Bay

Sediment-bound contaminant transport dynamics in and around Vidy Bay

Hydrodynamics within the Bay

Mixture risk assessment of chemicals: from the theory to the application

Risk assessment of chemical mixtures in the Lake Geneva catchment

Sources of chemicals: the catchment

Behaviour of dissolved chemicals in a lake

Behaviour of sediment-bound chemicals in a lake

Risk assessment of the chemicals present in a lake