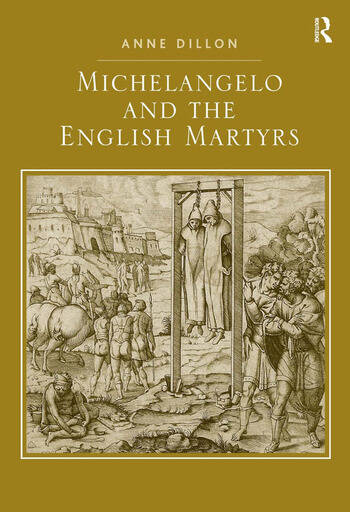 Michelangelo and the English Martyrs

In May 1555, a broadsheet was produced in Rome depicting the torture and execution in London and York of the Carthusians of the Charterhouses of London, Axeholme, Beauvale and Sheen during the reign of Henry VIII. This single-page martyrology provides the basis for an in-depth exploration of several interconnected artistic, scientific and scholarly communities active in Rome in 1555 which are identified as having being involved in its production. Their work and concerns, which reflect their time and intellectual environment, are deeply embedded in the broadsheet, especially those occupying the groups and individuals who came to be known as Spirituali and in particular those associated with Cardinal Reginald Pole who is shown to have played a key role in its production. Following an examination of the text and a discussion of the narrative intentions of its producers a systematic analysis is made of the images. This reveals that the structure, content and intention of what, at first sight, seems to be nothing more than a confessionally charged Catholic image of the English Carthusian martyrs, typical of the genre of propaganda produced during the Reformation, is, astonishingly, dominated by the most celebrated name of the Italian Renaissance, the artist Michelangelo Buonarotti. Not only are there direct borrowings from two works by Michelangelo which had just been completed in Rome, The Conversion of St Paul and The Crucifixion of St Peter in the Pauline Chapel but many other of his works are deliberately cited by the broadsheet's producers. Through the use of a variety of artistic, scientific and historical approaches, the author makes a compelling case for the reasons for Michelangelo's presence in the broadsheet and his influence on its design and production. The book not only demonstrates Michelangelo's close relationship with notable Catholic reformers, but shows him to have been at the heart of the English Counter Reformation at its inception. This detailed analysis of the broadsheet also throws fresh light on the Marian religious policy in England in 1555, the influence of Spain and the broader preoccupations of the Counter Reformation papacy, while at the same time, enriching our understanding of martyrology across the confessional divide of the Reformation.

Contents: Introduction; Three cardinals and a pope; The martyrdom of the English Carthusian fathers; The broadsheet images; Reginald Pole and the broadsheet; Michelangelo and the Cappella Paolina: the final frescoes; Ecclesia viterbiensis; Reginald Pole and the Cappella Paolina frescoes; Michelangelo in the broadsheet images; Postcards of Rome; English martyrs in a Roman landscape; Prints, cartoons and drawings; Anatomists and artists; The cardinal and his physician; A demonstration of a dissection; Anatomical research and the archconfraternity of San Giovanni Decollato; The case of Michael Servetus and pulmonary circulation; The artist; The recipient; Coda; Appendix; Bibliography; Index.

Anne Dillon is a member of Lucy Cavendish College, Cambridge.

'Dillon's study should be of interest to specialists and non-specialists, alike. It offers clear analysis and is incredibly detailed, systematically explaining every strand of her argument and how each piece fits together.' Sixteenth Century Journal Volume ’Michelangelo and the English Martyrs is a stunning piece of detective work. Anne Dillon’s impressive research unlocks the secrets of an extraordinary broadsheet and reconstructs in compelling detail the overlapping religious, intellectual, political and cultural worlds from which it emerged. In the process, she transforms our understanding of the connections between English Catholicism, the European Counter Reformation, and the artistic Renaissance that flowered in sixteenth-century Rome. To read this remarkable book is to be taken on a fascinating journey that starts in Henrician London and ends in Michelangelo’s studio.’ Alexandra Walsham, University of Cambridge, UK 'This is a beautifully crafted book in every sense, from its scholarship to its gorgeous illustrations. It casts new, scintillating light on a wide array of subjects, from early modern Catholicism and its interaction with the Renaissance to the fate of Roman cadavers. Above all, this book shows just how eloquently artistic imagery could speak, and continues to speak, about politics, science and faith. You may never regard a picture in the same way again.' Lucy Wooding in The Tablet 'Unquestionably deep and complex, Michelangelo and the English Martyrs is a fine achievement. For all its tangled web, Dillon patiently carries the reader throughout the book and convinces with a number of her assessments. With an array of characters from Reginald Pole to Philip of Spain and Michelangelo this intriguing book further places English Catholicism in the European scene from which it has too long been isolated.' The Catholic Times 'Dillon describes a fascinating network of connections among Spanish kings, artists, great physicians of the age, theo

Michelangelo and the English Martyrs