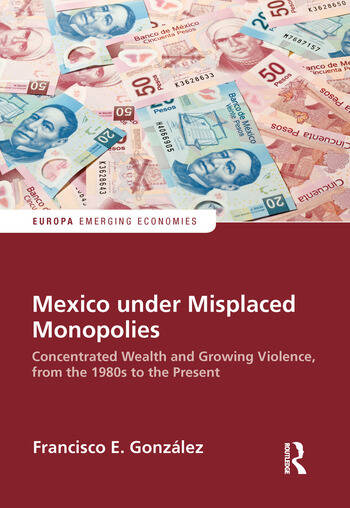 Mexico under Misplaced Monopolies: Concentrated Wealth and Growing Violence, from the 1980s to the Present

Mexicans and those who follow Mexican affairs were optimistic in 2000 when the country experienced its first alternation in government (from the Partido Revolucionario Institucional –PRI--to the Partido Acción Nacional--PAN) in more than 70 years. Moreover, the Mexican economy had been restructured in a more open, market-led direction in the course of the 1980s and 1990s. The outcomes of these dual transitions were expected to create a new type of politics that were representative and accountable to citizens, and an economy that would grow rapidly, as it was forced to modernize by facing international competition.

Some two decades later, views about Mexico are much less sanguine, and for many the country continues to follow a bipolar politico-economic trajectory characterized by periods of enthusiasm and mania which are followed by crisis and depression. This book presents a new analytical framework and reviews in detail Mexico’s political and economic history since the 1980s. The explanation offered is based on the idea of ‘misplaced monopolies’--i.e. an open political regime but a weak, fragmented state, and an internationally open economy, but highly concentrated economic sectors and activity in the domestic sphere. Accordingly, sown in the course of the crisis-ridden 1980s and 1990s, misplaced monopolies grew roots and became core features of Mexico’s political economy in the 2000s and 2010s. The end result has been great concentration of wealth in a small number of hands, and the dramatic growth in brutal violence in many parts of the country. From this perspective, unless ‘misplaced monopolies’ are reversed, conditions will remain prone to crisis, polarization, and conflict in Mexico. This volume concludes by extrapolating the framework and placing Mexico in comparative perspective, alongside internationally important countries such as Brazil, China, India, and Russia.

This is a highly original investigation that will interest people who follow Mexican politics and its economy. The analytical framework will be of use to analysts, scholars, and students of comparative political economy, democratization studies, market reforms, and security and conflict studies.

2. Historical Evolution of Political and Economic Monopolies in Mexico, Antiquity to the 1980s

3. The Onset and Entrenchment of Misplaced Monopolies in Mexico’s Political Economy, 1980s to 2006

5. Why Does Mexico not Grow at High Rates and Distribute its Wealth Fairly?

6. Why Is Mexico so Violent? Governors, Caciques and Cartels – The Fall of PRI Hegemony and the Rise of ‘Feuderalism’

is an Associate Professor of International Political Economy specialized in Latin American countries at the Paul H. Nitze School of Advanced International Studies (SAIS) of the Johns Hopkins University, in Washington, DC, USA. Professor González is also the author of the books Dual Transitions from Authoritarian Rule (2008) and Creative Destruction? Economic Crises and Democracy in Latin America (2012), both published by Johns Hopkins University Press.

Mexico under Misplaced Monopolies: Concentrated Wealth and Growing Violence, from the 1980s to the Present