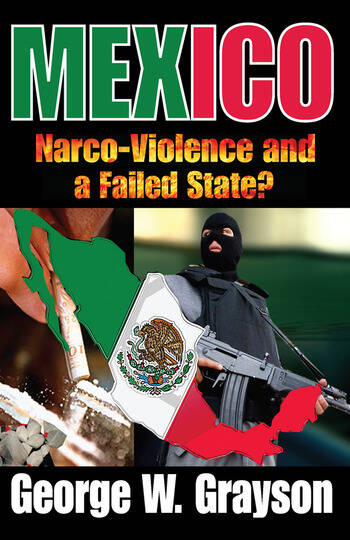 Mexico: Narco-Violence and a Failed State?

* Mexico was named an Outstanding Academic Title of 2010 by Choice Magazine.

Bloodshed connected with Mexican drug cartels, how they emerged, and their impact on the United States is the subject of this frightening book. Savage narcotics-related decapitations, castrations, and other murders have destroyed tourism in many Mexican communities and such savagery is now cascading across the border into the United States. Grayson explores how this spiral of violence emerged in Mexico, its impact on the country and its northern neighbor, and the prospects for managing it.

Mexico's Institutional Revolutionary Party (PRI) ruled in Tammany Hall fashion for seventy-nine years before losing the presidency in 2000 to the center-right National Action Party (PAN). Grayson focuses on drug wars, prohibition, corruption, and other antecedents that occurred during the PRI's hegemony. He illuminates the diaspora of drug cartels and their fragmentation, analyzes the emergence of new gangs, sets forth President Felipe Calderi?1/2n's strategy against vicious criminal organizations, and assesses its relative success. Grayson reviews the effect of narcotics-focused issues in U.S.-Mexican relations. He considers the possibility that Mexico may become a failed state, as feared by opinion-leaders, even as it pursues an aggressive but thus far unsuccessful crusade against the importation, processing, and sale of illegal substances.

Becoming a "failed state" involves two dimensions of state power: its scope, or the different functions and goals taken on by governments, and its strength, or the government's ability to plan and execute policies. The Mexican state boasts an extensive scope evidenced by its monopoly over the petroleum industry, its role as the major supplier of electricity, its financing of public education, its numerous retirement and health-care programs, its control of public universities, and its dominance over the armed forces. The state has not yet taken control of drug trafficking, and its strength is steadily diminishing. This explosive book is thus a study of drug cartels, but also state disintegration.

Mexico: Narco-Violence and a Failed State?