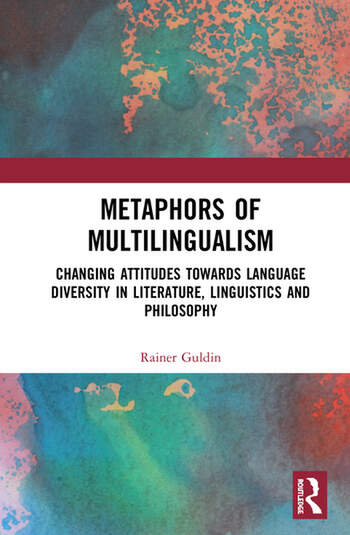 Metaphors of Multilingualism: Changing Attitudes towards Language Diversity in Literature, Linguistics and Philosophy

Metaphors of Multilingualism explores changing attitudes towards multilingualism by focusing on shifts both in the choice and in the use of metaphors. Rainer Guldin uses linguistics, philosophy, literature, literary theory and related disciplines to trace the radical redefinition of multilingualism that has taken place over the last decades. This overall change constitutes a paradigmatic shift. However, despite the emergence of the new paradigm, the traditional monolingual point of view is still significantly influencing present-day attitudes towards multilingualism. Consequently, the emergent paradigm has to be studied in close connection with its predecessor.

This book is the first extensive attempt to provide a critical overview of the key metaphors that organize current perceptions of multilingualism. Instead of an exhaustive list of possible metaphors of multilingualism, the emphasis is on three closely interrelated and overlapping clusters that play a central role in both paradigms: organic metaphors of the body, kinship and gender metaphors, as well as spatial metaphors. The examples are taken from different languages, among them French, German, Chinese, Japanese, Spanish and Brazilian Portuguese.

This is ground-breaking reading for scholars and researchers in the fields of linguistics, literature, philosophy, media studies, anthropology, history and cultural studies.

1. The Patched-Up Face of Multilingualism

5. The Embodied Plurilingual Self

12. The Centrifugal Forces of Variation and Stratification

14. The Ocean of Heteroglossia

Rainer Guldin is lecturer for German Culture and Language at the Faculties of Communication Sciences and Economics of the Università della Svizzera Italiana in Lugano (Switzerland). His publications include Vilém Flusser (1920-1991). Ein Leben in der Bodenlosigkeit. Biographie (2017) and Translation as Metaphor (2016).

Metaphors of Multilingualism: Changing Attitudes towards Language Diversity in Literature, Linguistics and Philosophy