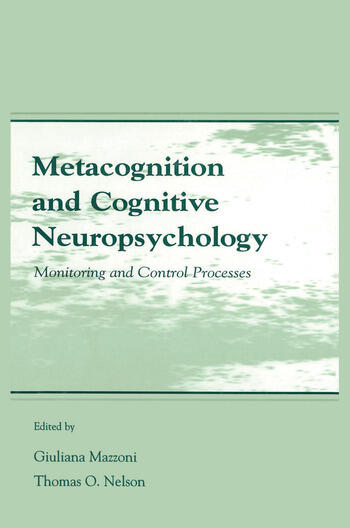 Previously, control processes have been examined within the frameworks of two parallel but independent paradigms: those of cognitive psychology and of neuropsychology. Cognitive psychologists have stressed the theoretical and empirical nature of normal unimpaired control processes; neuropsychologists have focused on the relationships between damage to specific functional areas of the brain and deficits in specific control processes. Both have contributed extensively to our understanding of control processes. However, they have tended to operate independently, with little if any cross-talk between disciplines, despite the potential benefits such dialogue is likely to generate.

This book represents the first attempt to synthesize cognitive and neuropsychological perspectives on control processes. It contains state-of-the-art reports on various aspects of control processes by experts from both disciplines.

"In sum, Mazzoni and Nelson are to be commended for producing a first-rate volume on neuropsychology and metamemory, the first of its type. Those with interests in metacognition, executive functioning, or control and monitoring functions will find this indispensable. The book is...well conceived."
—Applied Cognitive Psychology

"...offers a useful analysis of contemporary issues in metacognition."
—American Journal of Psychology