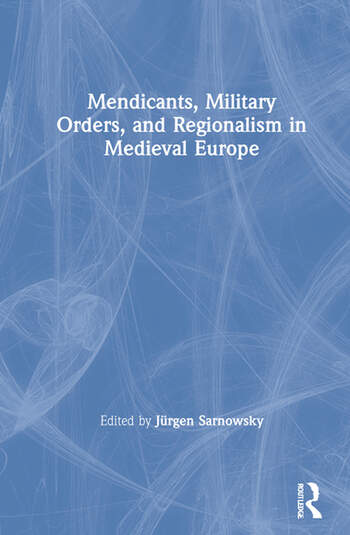 The new religious orders of the 12th and 13th centuries - the military orders and the mendicants - were established as international orders. Yet they were inevitably dependent on regional and local conditions for recruitment and finance, and could not escape involvement in the power structures, whether secular or ecclesiastical, of the areas in which they were based. This book examines the tensions that arose from this, and how they evolved and were manifested. It looks in particular at the orders’ early expansion, and at the special conditions that applied in frontier regions, notably those in Northern and Central Europe which have typically been less well studied.

Contents: Introduction: Regional problems in the history of the Mendicant and Military Orders, JÃ¼rgen Sarnowsky; Religious Orders in Border Regions: Religious frontiers: Bonds and tensions on the frontier: the Templars in 12th century Western Catalonia, Nikolas Jaspert; Political Frontiers: The Knights Hospitaller on the frontiers of the British Isles, Helen Nicholson; Linguistic Frontiers: Quelques aspects de comparaison entre les commanderies de l’Ordre teutonique Ã  Metz et Ã  Liège au moyen-Ã¢ge, Dieter Heckmann; Different Levels of Regional Influence: Popes and Emperors: From the Holy Land to Prussia: the Teutonic Knights between emperors and popes and their policies until 1309, Klaus Militzer; Kings: Kings and priors: the Hospitaller priory of England in the later 15th century, JÃ¼rgen Sarnowsky; Dynasties: Between international horizon and regional boundary; the Bohemian crosiers of the Red Star in Silesia, Andreas RÃ¼ther; Lesser Nobility: The ’Hospice of the German nobility’: changes in the admission policy of the Teutonic Knights in the 15th century, Johannes A. Mol; Bishops and Towns: The Basle Dominicans between town and province, Bernhard Neidiger; Nations, Regions and the Internal Structures of Religious Orders: Multinationality and Local Foundations: Local ties and international connections of the London Mendicants, Jens RÃ¶hrkasten, Regional Influences and Internal Divisions: change and conflict within the Hospitaller province of Italy after 1291, Anthony Luttrell; National Influences and Internal Divisions: The Hospitallers, Bohemia and the Empire, 1250-1330, Karl Borchardt; Economic Influences and Internal Divisions: King Wenceslas and the dissolution of the Teutonic Order’s Bohemian Bailiwick, Libor Jan; Orders, Regions and Art: The Mendicant Orders and their architecture in Scotland, Anneli Randla; Conclusion: Mendicants, Military Orders and Regionalism, JÃ¼rgen Sarnowsky; Index.

'...the bibliography...takes up a good thirty pages and therefore represents an indispensable tool for anyone who wishes to approach the study of the religious orders in the Middle Ages.' Studi Medievali