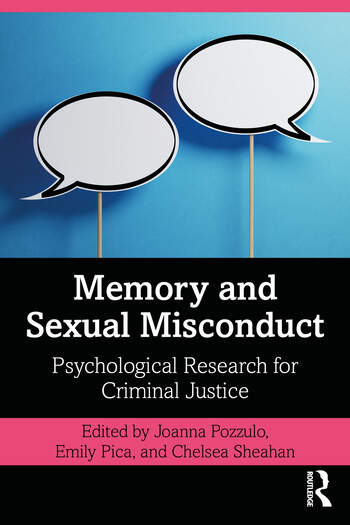 Memory and Sexual Misconduct: Psychological Research for Criminal Justice investigates the veracity of memories of sexual misconduct and the factors that may influence accurate recall, and fundamentally assesses whether psychological science can help the criminal justice system in determining which accusations are likely to be accurate, and which are not.

In recent years, the public has been inundated with announcements of sexual assault allegations, in particular against public figures like politicians, businessmen, movie moguls, and professional athletes. Many of these accusations concern events that occurred several years prior to their announcements and trials. Drawing upon a compilation of real-life sexual assault cases and psychological science on recall and sexual trauma, this book provides an analysis of memory reports of sexual misconduct, including inappropriate comments, behaviors, harassment, and assault. It compares these memories with other types of memory, such as flashbulb memories, co-witness conformity memory, and autobiographical memory. Memory and Sexual Misconduct helps readers interpret the role of emotion, the level of detail, and the possible distinction between someone remembering a past event and believing the past event occurred.

By providing a thorough evaluation of the likelihood that misconduct memories are accurate and investigating factors that affect this accuracy, Memory and Sexual Misconduct is an invaluable text to both the criminal justice system and the general public, particularly as sexual misconduct allegations of past events continue to come to light.

Chapter 4: Often but Not Always: When Does Age at the Time of Event Predict Memory for Sexual Violence?

Chapter 6: Perceptions of Child Sexual Abuse Victims: A Review of Psychological Research and Implications for Law

Dr. Joanna Pozzulo is a full professor at Carleton University. Her research focuses on the identification abilities of child and adult eyewitnesses. She also examines factors as they interact with eyewitness identification within a juror decision-making context.

is an assistant professor at Austin Peay State University. Her research focuses on wrongful convictions, juror decision making, and factors that impact eyewitness memory and the collection of eyewitness evidence.

is an adjunct research professor at Carleton University. Her research focuses on factors that impact eyewitness memory and the collection of eyewitness evidence. Her secondary research interest(s) include juror decision-making, wrongful convictions, and corrections.